Written by Steven on 12 March 2019. Posted in Accessories.

Coming from a traditional film background, I enjoyed the large bright viewfinders of Olympus’ original OM System and it was one of the attributes that made the OM1 so successful back in the 1970’s. My migration path over to digital eventually saw me drop the viewfinder concept altogether, as I embraced Leica's X1, X113 and T cameras. Generally speaking I was happy composing pictures on the camera’s rear screen, but it does have limitations.

Two key detractors for me are; 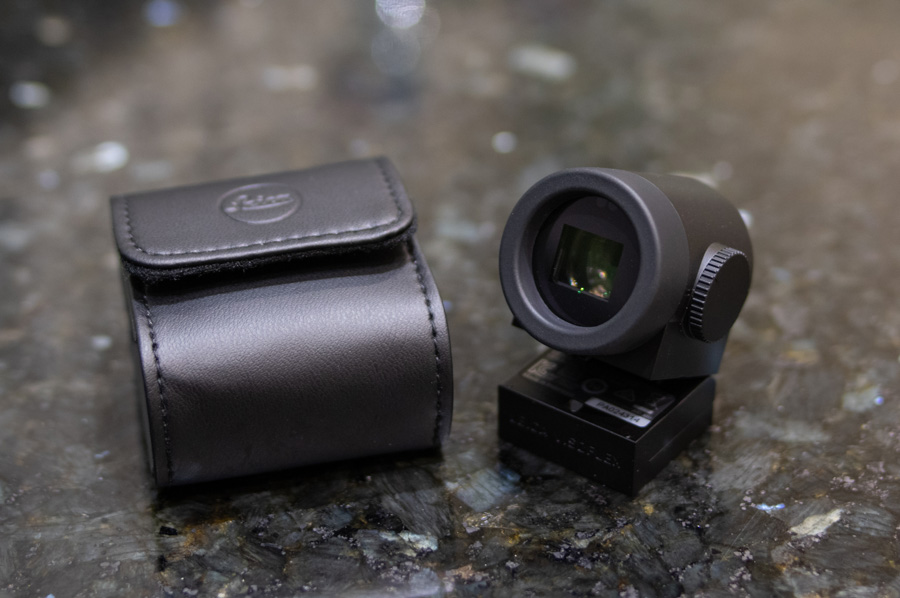 A less tangible aspect is one of detachment from the camera when holding it out in front of me. While it is not necessarily held at arm’s length, looking through a viewfinder is a far more intimate experience, and removes external distractions.

As I invested more into the TL system, it was inevitable that I took a closer look at the Visoflex 020 finder, as there is little else on the market than can do the job. My experience of EVF’s is a bit limited, having been mostly gained by handling demo cameras at shows or dealers. I love the high-resolution finder of Leica’s SL camera and found this set a very high standard that left other brands behind. Some of the offerings from Olympus, Fuji and Sony were OK, but fell short of what, in my opinion, could be considered acceptable.

Having never seen or tried the Visoflex, I surprised myself and ordered one over coffee one morning. Based on everything I had read and tempering this with my own requirements, sufficient caffeine gave me the recklessness I needed to press the ‘Buy’ button and sit back and wait for my internet purchase to arrive.

Upon unboxing, I couldn’t help but be a little disappointed by the build quality of the finder. Even though I had been prepped for this after reading forum comments, the experience was still dishevelling and highlighted, not for the first time, Leica’s lack of attention to detail when it comes to accessories. The build quality feels cheap and flimsy particularly alongside my T camera body (a little less so with my X113). I am guessing that the extensive use of plastic is due to the GPS module being sited within the finder, but I am sure that with a bit more thought, parts of the main barrel could have been made from metal, giving it a more premium look and feel. The increase in cost would have been negligible and instilled more confidence in its longevity. This is an item I would not dare leave on the body as a permanent fixture for fear of it breaking off at the shoe. To me, it is not a quality item and falls well short of expectations associated with its high cost.

Slipping the finder into my T’s hot shoe, I was pleased that the fit was snug as it has no locking ring to secure it.  With a resolution of 2.4 million pixels, the Visoflex lacks the SL’s whopping 4.4-million-pixel resolution, so I thought it inevitable I would be disappointed when powering the camera up and looking into it. There is a short (< one second) delay while the eye sensor activates but surprisingly the image is very impressive, being large with excellent colour balance. After adjusting the dioptric correction by means of the wheel on the barrel, the image really popped into life, allowing me to view fine detail very easily. Depth of field was also very easy to manage (I use native TL lenses). Shooting information available on the rear screen is transferred to the upper and lower parts of the image and does not distract in any way. The refresh rate is also pretty good, there is a slight flicker but nothing distracting. 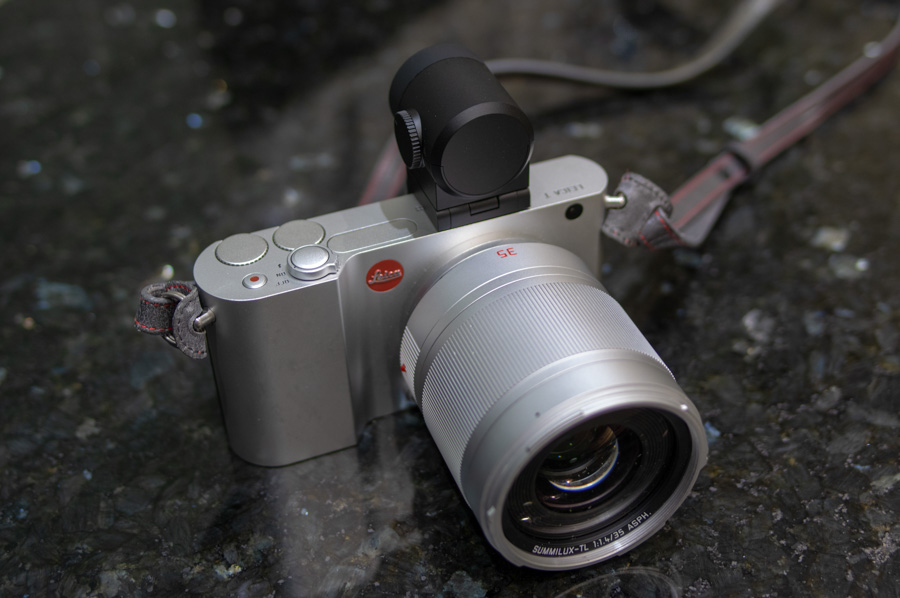 One of its most useful features is the ability to tilt the finder in an upward arc (to 90°), allowing the user to look down into it from above the camera, similar to TLR’s in days of yore. As the T’s rear screen cannot be tilted, this is a boon for getting those low angle shots that my ageing back protests so much about. It also adds a level of stealth to photography; for example, sitting on some steps people watching, the camera can be rested on my knee while looking down into it waiting for the perfect ‘street’ moment – far less noticeable to passers-by. This is also a good way to steady longer lenses, such as the TL 55-135 zoom. I can see this feature being very useful when travelling with my smallest tripod; it only extends to around 50cm which can be limiting, so tilting the viewfinder to 90° will be a real bonus. When not tilted, the finder clicks reassuringly into the shoe base.

The Visoflex has another trick up its sleeve… a GPS module –  a useful addition as the T does not have this natively built in. It has to be enabled in the camera’s settings and I am not sure what impact it has on battery life at this stage.

Using the EVF outside in really bright light confirms how much easier composure is. I’m no longer trying to shield the rear screen to see subject matter. A slight niggle is the eyecup (or lack of one). A narrow piece of hard plastic is all that separates the eye from the finder window – a rubberised cup would have made it so much more comfortable.

The T’s dynamics really change when the EVF is mounted, and for the better. Simply put, it provides a far more immersive experience, and one I didn’t know I had missed until now. It is such a shame that it lacks the build quality Leica are renowned for. I intend to use it a lot so time will tell exactly how robust it turns out to be. It is also a pity that it is not produced in a silver finish as well as black, as it would look stunning on a silver T body, really adding to the overall Bauhaus design.