This is one of the high magnification lenses made by Olympus. It can be mounted directly onto a camera body, but requires some form of extension to be of any benefit. Two main units were provided by Olympus for this purpose; the 65-116 telescopic tube and a set of very well made auto bellows. I use the former, as I have found it to be fairly robust and very portable. Other extension tubes can be used, such as combinations of the 7, 14 and 25mm variants. However, magnification is more limited. 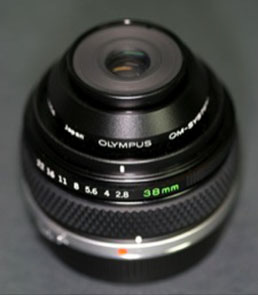 The bright f2.8 aperture allows for easy focussing, assuming the subject is well lit. As can be expected, depth of field is very shallow at this aperture so stopping down is almost mandatory. I find apertures of f5.6 or f8 allow me to focus on the main subject but retain sufficient out of focus areas to create depth. Where a subject calls for a burst of flash, I use a F280 off-camera in conjunction with two modelling lamps. Mounted on the 65-116 extension tube, it operates at maginfications roughly between 3 and 4.5X life size (a little more if the helicoid is racked out). Used with bellows, magnification is increased to around 6.7X life size.

Many years ago, I owned the 20mm f2 variant. The biggest problem I found was the ability to keep everything still during exposure. I would spend hours setting up pictures, only to find the results were unsharp. No doubt this was due to my lack (at the time) of a good sturdy tripod and some kind of focusing rail. The 20mm operates at much higher magnification than the 38mm, exasperating these problems. I now use a heavy tripod on top of which I fix the Novoflex Castel Cross-Q focusing rack. In essence it is two focusing racks fixed together which operate on different axis. It is a superbly crafted item, allowing tiny amounts of movement with no backlash. Since using this combination, I have found macrophotography a much more pleasurable pastime, and my high magnification results have improved significantly.

The lens produces very sharp images, with excellent colour balance. The tapered nose means less chance of shadows affecting the subject where natural light is used (strategically placed reflectors can help here). It offers views of worlds within our world that are often hidden to the naked eye. For example, moss is transformed into a translucent green jungle, in which transparent bugs roam. Sometimes I get so involved in observation, I forget to press the camera shutter. My skill and technique are challenged each time I use this lens, but the rewards are pretty unique.