We are regular attendees at the annual Focus on Imaging show, staged at the NEC, Birmingham. It is the best opportunity in the UK to see and test the latest photography related products and to pick up sagely advice from the many seminars held throughout the event.

The first stand we were lured to was Benro, and it was their Cool Walker (100, 200 and 300) range of rucksacks that drew us in, although only the 100 was on display. Benro are a manufacturer that we have overlooked on previous occasions so stepping onto their stand revealed an Aladdin’s cave of well manufactures bags, tripods and brackets we were previously unaware of. The Cool Walker 100 rucksack was small enough to be used as airline carry-on luggage, something of particular interest to us. It features an easy side access system with a really clever expandable inner sleeve that can house a SLR body with zoom lens. Once expanded to meet the dimensions of the camera, the sleeve can be secured by means of a strap that 1; supports the lens, and 2; prevents the sleeve from expanding further. Like many of today’s designs, the rucksack has a zippered top section that can be used to store lenses and peripherals. It seems to have an almost inexhaustible supply of smaller pockets stitched into the main body and waist belt – really useful for batteries, filters, memory cards, phones, mp3 players etc.

The second item we really liked was Benro’s Traveller Flat series of tripods. Instead of the usual triangular leg configuration when folded, it has a flat profile which sees the legs aligned in a row, which is great for attaching to a bag or storing in a case. Available in Aluminium or Carbon Fibre, they are beautifully engineered products. If we were in the market for a tripod, without doubt our money would be spent on one of these. 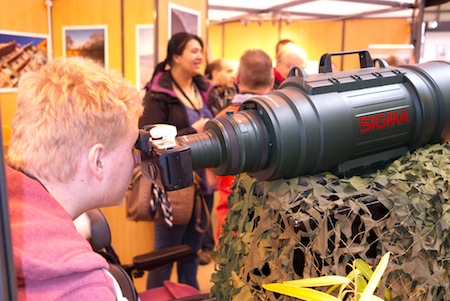 We swung by the Billingham bag stand as I have a real fondness for their traditionally designed products, having used their 335 model for more than 20 years. The 2013 prices for their products made me wince a bit – if I was purchasing the same bag today it would cost me £225 more than I paid back in the 1990’s! Having said that, there is no doubting that Billingham quality is amongst the best as my bag is as good as the day I purchased it.

The Eizo stand was particularly alluring as their range of ColorEdge monitors are sublime, displaying a wonderful palette revealing subtle colour tones that make digital imaging a pleasure. We use a 27” Apple Thunderbolt display for our image processing but it would be difficult to choose between this or a ColorEdge if we were choosing again.

Fuji’s stand has been very innovative for the last couple of years and, with plenty of new products to demonstrate, we could not resist a look around. I am a big fan of the X100 and it was a close tie between this and Leica’s X1 when I was in the market for a high quality fixed focal length camera. The original X100 has a few issues, some of which were corrected with firmware updates. However the new X100s appears to be a fully ‘debugged’ product that retains all of the traditional charm of its predecessor. I was surprised to find that the original X100 was for sale at a special show price of £499 – around half of what was charged when it was released.

It was good to handle the X-Pro 1 again- the last time I had done so was at last year’s show. I find the idea of an interchangeable lens ‘rangefinder’ style camera very appealing, particularly when it looks as good and is as feature packed as the X-Pro 1. New to the show was the X-E1, which shares the same lens mount as its bigger brother but with a reduced feature set.

Slide and negative scanners are of interest to us, and we are ‘between models’ at the moment. Plustek have a new professional grade scanner on the market (OpticFilm 120) and I was keen to take a look at it. The stand was very busy and we could not get too close to see a demo, but it is a pro-grade model and has a huge footprint compared to other Plustek models. I have little doubt that the 120 delivers excellent results but this comes with a hefty price tag. 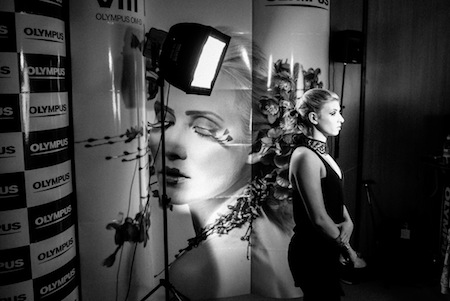 The Olympus stand concentrated mainly on the highly successful OM-D, and other Micro-Four Thirds models, along with lenses and accessories. But it was not the huge affair that last year’s show saw, with catwalks and lots of Olympus representatives on hand to demo the kit. The good news was that Black Dog was there again, delivering his usual excellent presentations. My gripe was that again there was no sign of the brilliant Four Thirds lenses or E5. Neither was there any mock up or announcement of a new model.

I was pleased to see Paramo stand attending once more. I am a big fan of their fleeces, jackets and shirts and have used them for many years now. Their products really do stand up to most of what the weather can throw at them and still look presentable. I have been wearing some of my gear for at least seven years and it shows no sign of fatigue or scruffiness, having been slept in and rolled up in the bottom of rucksacks more times than I care to remember. In fact I recently replaced one of my jackets not because it was worn out, but purely because I am fed up of wearing the same colour.

Towards the end of our visit we stopped by the Hasselblad stand. It was the glint of gold from one of the cabinets that caught my eye – one of their limited edition models that was simply beautiful. But next to this was an item of real interest to me; cased on a solitary pedestal was one of the cameras that had been used one the Apollo moonshot, accompanied by a photo of the Eagle lander signed by the crew – awesome! 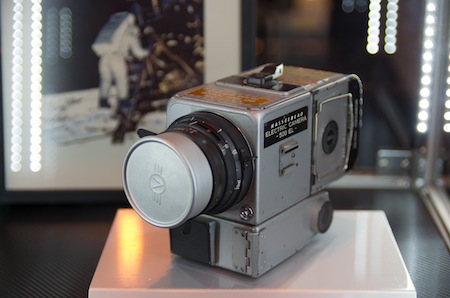 One of the biggest disappointments of the day was that Pentax had no representation whatsoever. Last year saw them share part of the Jacobs stand but their recent administration has put an end to this. Such a shame as we were hoping to take a look at the new K5II DSLR, and MX1. It was last year’s show that gave Ethan the idea of purchasing the K5 and 16-50 D* lens, as he could try them out before buying. I hope that Pentax address this issue for future shows as their products are real industry gems.

Similarly, there was a no show from bag manufacturer Kata or Tamrac.

So, having gleaned plenty of ideas for future purchases, we left the hall having only spent car parking and Subway lunch costs – a most inexpensive and good day out.