From Zuiko 50 to Summilux SL 50 - what happened to my taste?

Anyone delving around in the PhotoArk archives will soon notice my love of the Olympus OM System film cameras and lenses. And anyone unfamiliar with the system may not realise that one of its core values was ease of transportation. Those last three words can be distilled into another word - portability. And there is a strong argument that states that in order to be truly portable, compactness is a fundamental requirement. One of the driving reasons for being a user of the OM System throughout my film photography years that that most OM camera bodies and lenses clearly demonstrated this quality in their design… two of the best examples of this in the lens line-up are the Zuiko 100mm f2.8 and 40mm f2, 48mm and 25mm long respectively, with both sharing a 49mm filter thread. A OM3Ti body and a three prime lenses takes up very little little space, which is why my OM system kit accompanied me on most journeys through my life. 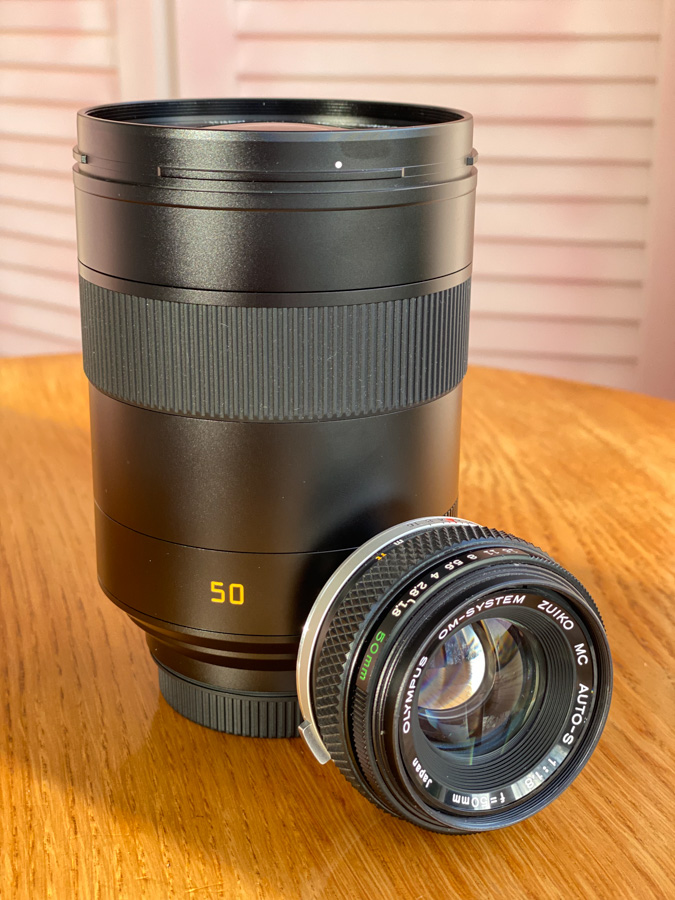 The purpose of this article is not to lament the passing of the once celebrated OM film system, but simply musings around how lens sizes and personal taste have changed over the decades. The OM system, like many Leica M lenses are great examples of how just how much a lens’ dimensions can be reduced when size becomes one of the key objectives. Any smaller than this would aggravate fundamental laws of physics causing the unwanted introduction of various lens aberrations.

The 50mm lens can be found in abundance throughout the last century. Considered as a ‘normal’ or ‘kit’ lens, they have been produced by all major players in the photographic industry. Therefore it is reasonable to assume that this focal length has probably had more R&D poured into it than any other. As photographers, we have a choice of super bright f0.95 to more ‘sedentary’ f2 apertures, with a gaggle of intermediate apertures to boot depending on the system of choice. In the 1970’s and 80’s the 50mm f1.8 was one of the most widely sold lenses, often forming part of a kit along with the camera body. It is one of those kit lenses that rests on a shelf at home, attached to my original OM1n body. The Zuiko 50mm f1.8 was Olympus’ offering with OM1n and OM2n cameras at the time. At 31mm long and with just six elements, it weighs less than 200 grams. The results were always very consistent from my copy, even wide open. Bokeh is very nice and provides excellent subject separation from 1.8 to 2.8. I used the lens for more than 30 years and it never disappointed - not bad for a ‘kit’ lens. It still works perfectly today, although no longer gets used since I fully embraced digital technology.

Last week I became the proud owner of a Leica Summilux SL 50mm 1.4 lens, a tour de force in lens design and one of the newer generations of 50mm’s designed with optimum optical quality in mind. When priority is given to optical quality over all other attributes, certain laws of physics mean that size becomes very much of secondary importance. I have owned several 50mm lenses over the years, some autofocus, some not. The fastest was f1.2 and the slowest f2.0. But nothing prepared me for the size of the Summilux. All reviews I had read commented on this, and videos I had watched gave me an idea of what is was like. But when I first took it out of the box, it seemed bigger - a bit like when you purchase a table that, in the showroom, looks reasonably sized. But upon getting it home, it swallows up an entire room. OK so the lens didn’t fill the room, but it did look darn large for a 50.

After a little bit of fiddling about with it, I noticed my dinky Zuiko 50mm resting in quiet retirement, and it struck me as a bit odd that the mass of the Summilux was several times larger than the Zuiko, and I began wondering what happened to 1) lens evolution and 2) my own taste when it came to lens design.

There are lots of things wrong attempting to compare these two 50mm’s. The maximum aperture and autofocus vs manual focus are probably the two most glaring points that stand out. But I had owned a f1.2 lens that was only 43mm long, albeit manual focus. And an autofocus f2 variant when I first started out in digital photography had been less that half the size of the Summilux. Both of these had delivered fantastic results, the latter like the Summilux, benefitting from weather sealing. Almost 50 years separates their technological blueprints, and they are very much products of their times. The OM System was all about moving away from large cameras and lenses that were the staple of press photography in the 1960’s and 70’s. Leica’s SL system is about a new generation of optical perfection and robustness. I think both achieved their goals. There is no doubt that, after the first outing with the Summilux, I owned something special. It has reawakened in me a fire to go out and shoot wide open and shallow, as I believe this is where the magic happens with fast Leica lenses.

My own taste in photography equipment jumped tracks sometime in the past, and identifying that paradigm moment of change has been difficult. I think it happened just a few years ago, when I purchased my first Summicron L lens. I was dumfounded by the results it produced. So much so that any consideration about its size and weight were instantly forgotten.

But I am sat here gazing at Beauty and the Beast, somewhat perplexed by the fact that I hadn’t realised this change had occurred until now. It took the purchase of a titan to wake me up to the thought that size (or lack of) was no longer important to me.