FujiFilm’s X series of cameras has made a big impact on the market since its introduction in 2010. Starting with the fixed lens X100, it has since evolved into a full mirrorless interchangeable lens system that meets the requirements of most, if not all, photographers. With the introduction of the X100 it seemed that Fuji were taking on Leica in terms of styling, and further models through to the current X-Pro2 also bear this trait. Back when the X100 was released, I was in the market for a fixed lens camera with 35mm equivalent lens so it naturally made it on to my short list of two – the other being Leica’s X1. The Leica won and the rest is history, as they say. 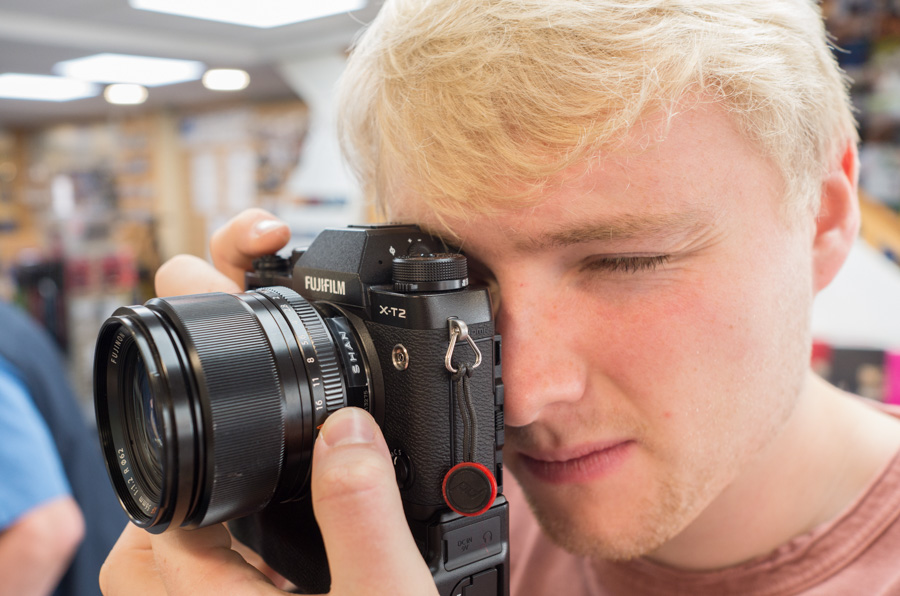 Even though I adore Leica’s product line up, I still keep an eye on FujiFilm’s camera developments, watching with a hint of jealously as their interchangeable lens cameras evolved. When the X-T1 was introduced, I really took notice and considered a dalliance with the graphite version. The lens line up is fairly mature and all I have read and seen of the 56mm f1.2 lens tugged at my wallet for years.

Anyone reading recent articles on PhotoArk will be aware that I am considering getting an interchangeable lens camera system once again. Given that I have no ties to legacy systems, the choice is wide open for me. I have looked at and used Pentax’s K System which I adore, particularly with the release of the K-1. I have lusted after Leica’s T-System, especially since they brought the TL Summilux 35mm f1.4 lens to market. But no commitment to either…yet.

When the recent announcement of the XT-2 was made, I thought I would take the time to get acquainted with it, particularly as Harrison Cameras in Sheffield were hosting a pre-launch event on July 30th. Having attended similar events at Harrison’s, I have always been impressed with the knowledge of their staff, the premises and, of course, the experience and opinions of any speakers attending. So it was that Ethan and myself drove to Sheffield to get our hands on the latest addition to the X System stable and see if it could make its way onto my shortlist.

It is not the intention of this article to examine in any detail the differences between the X-T1 and 2, other than to say that both models share very similar ergonomics. Closer inspection will reveal that the dials and grip are a little larger on the X-T2, and the rear screen can be tilted out from its left side. The movie mode button has been removed in favour of adding the option to the drive mode switch. This pleases me immensely and is something I wish Leica would take note of with their X-series designs. I am forever accidentally triggering movie mode and recoding unintentional previews of sky, my feet or clothing. There is a whole load of further enhancements that will be pretty well documented on the web, so I will not re-invent the wheel. 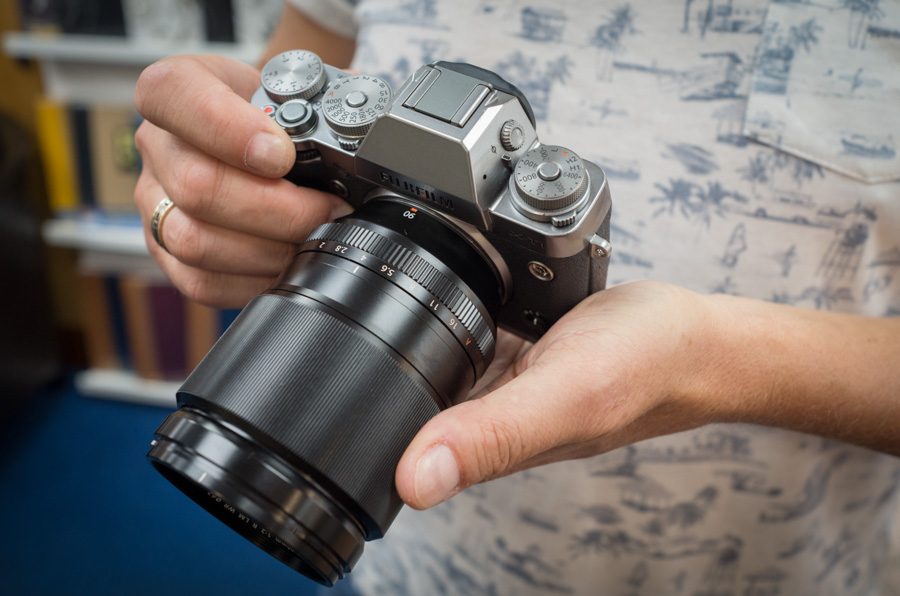 On display at Harrisons were several cameras and most of the lenses of the X series line up. Side by side were the X-T1 and 2 bodies and it was good to see that apart from the above mentioned observations the new arrival was the same size as its older sibling. From the rear, the cameras looked very similar, although there were some noticeable improvements to the eyecup. I like large eyecups so was pleased to see that the X-T2 catered for my taste here.

Each time I pick up the X-T1 I am immediately reminded of analogue SLR’s from the 80’s…I think it is the shape of the faux prism that does this. Picking up the X-T2 invokes similar memories, and the nod to this particular part of camera history pleases me. I like a bit of retro in my kit as I do feel that many past designs were true classics, not just for their looks, but because controls and ergonomics were at their most logical.

Handling the camera was very similar to handling the X-T1, so anyone familiar with the 1 would feel instantly at home with the 2. One very apparent improvement that will be appreciated by sports and nature photographers alike, is the improved speed of the autofocus module. Sample shots handed to us show that it can compete with the speed kings Nikon and Canon in this area, although I suspect that they still have the edge. How much this matters will be found out once the camera is released, but Ethan and I had no concerns about it.

One of the X-T1 bodies on show had the gorgeous graphite finish which I find particularly appealing, particularly when a chrome finish lens is attached to it. It really adds to the retro look, reminding me a lot of Olympus’ OM3Ti (and Ethan’s gunmetal Pentax K-3). At the moment the X-T2 is available only in black, but we were told that there may be a graphite version a little further down the line…time will tell.

Seeing the X-T series laid out before us, we were both reminded a lot of Olymous’s OMD range of Micro Four Thirds bodies. Similarities in their size were immediately apparent, although kudos to Fuji for making such a small APS-C sensor body. 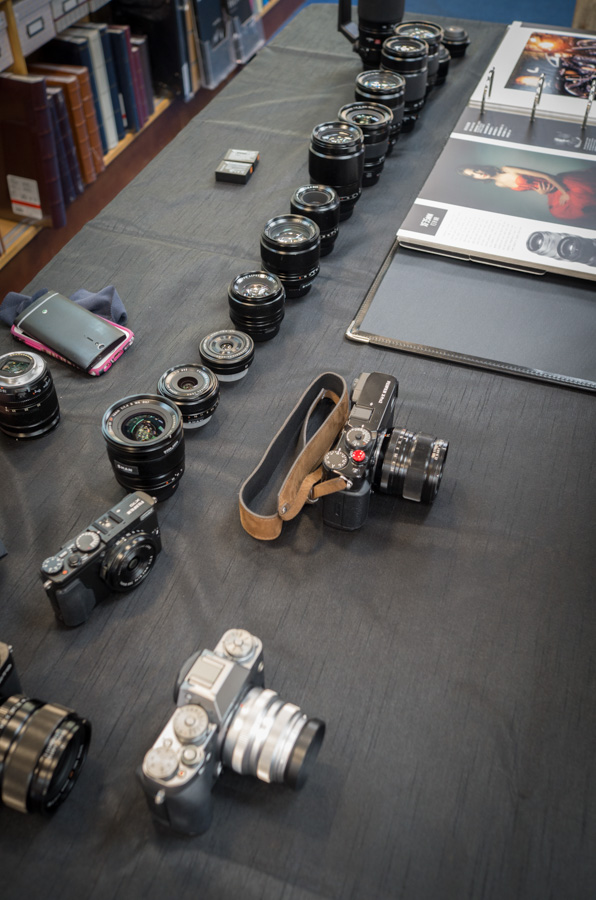 One of the lenses available to test was the 58mm f1.2. Given our love of fast glass, it was not long before we had attached it to the X-T2 and started taking a few sample shots with it - sample shots that we were told, disappointingly, we could not take home with us. This was due to the camera running pre-production firmware which may be subject to modification before final release. So we had to be content with previewing the output in-camera. Pointing the lens at some of the darker corners of the shop, the focus speed and accuracy was very impressive even with the lens wide open. Equally impressive was the sharpness of the results at 1.2, although it would have been good to have carried out a close up analysis of the corners under more controlled circumstances. Out of focus background areas were beautiful, lending a dream like quality to the image. Not only does this lens play well with the X-T2, it also balances and handles superbly.

Another lens combination that worked well was the 90mm f2. The 58mm gave us a useful 85mm(ish) focal length, a classic short telephoto property much covered by portrait photographers. The 90mm provides a 135mm reach, also useful for portraits but in my opinion, more flattering for the subject, particularly where head and shoulder studies are involved. I still have a 135mm Zuiko which is my all time favourite telephoto lens when I shoot film. We pointed the X-T2 and 90mm at the same dark recesses of the shop and again had no concerns about focus accuracy and speed…it did not hesitate or hunt.

Forming in my subconscious were the beginning of a very impressive system. Here was a camera and system that offered two of my favourite focal lengths. Next I tried something much wider…the 14mm f2.8. Taking into consideration the 1.4 conversion factor, this equates to around 20mm in full frame money - perfect for my wide angle needs. And it was no slouch when attached to the X-T2 either.

So here it was, a potential new system for me with a holy trinity of lenses that, in my brief time with them, gave me everything I was looking for. But I hesitated to pre-order and resisted the great trade in offers. Why? I guess I am not the kind of person to impulsively buy into a new system. Up until now, the search for my ideal system has lasted several months. Oddly, if the X-T2 was immediately available in a graphite finish, this would have put me a little close to parting with some cash - the cosmetic details mean a lot to me. Functionally, I could not have wished for more. However, I am content to sit on my hands and see how this new camera performs upon release and in those formative early months.

Also in the room, and not gone unnoticed, was a Leica T. It looked sensual compared to the X series (and pretty much everything else in the shop for that matter). Almost devoid of buttons and dials, its spartan look appeals to me immensely. And that Summilux 35mm f1.4 is sublime. Maybe this was why I was happy to sit on my hands a little longer.

PhotoArk would like to thank Harrison Cameras and Fujifilm for providing an excellent opportunity to see, touch and play with the X-T2 and many of the X series lenses. 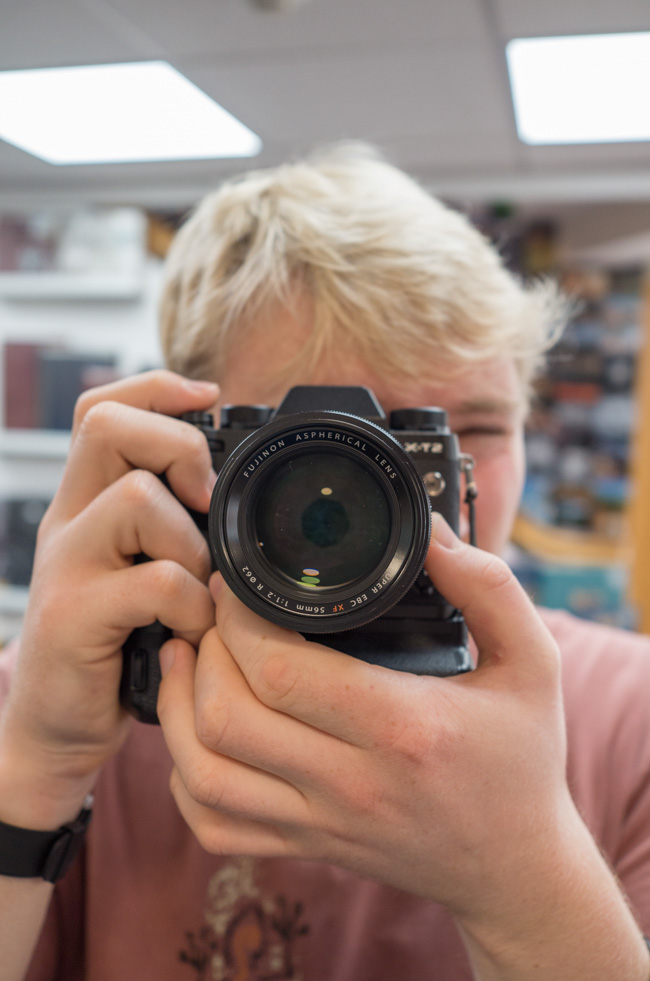 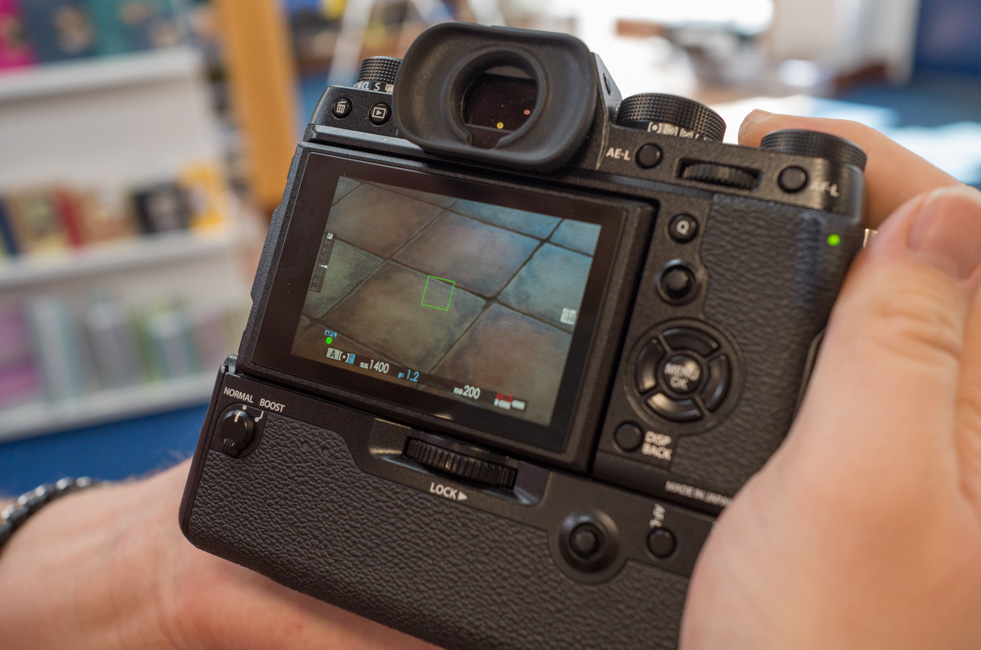 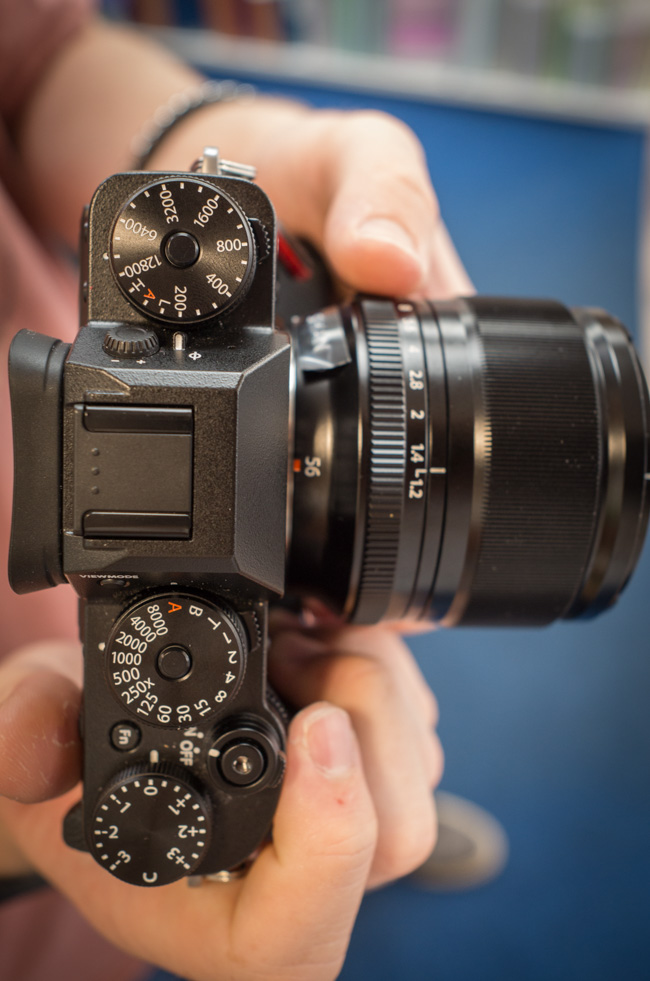 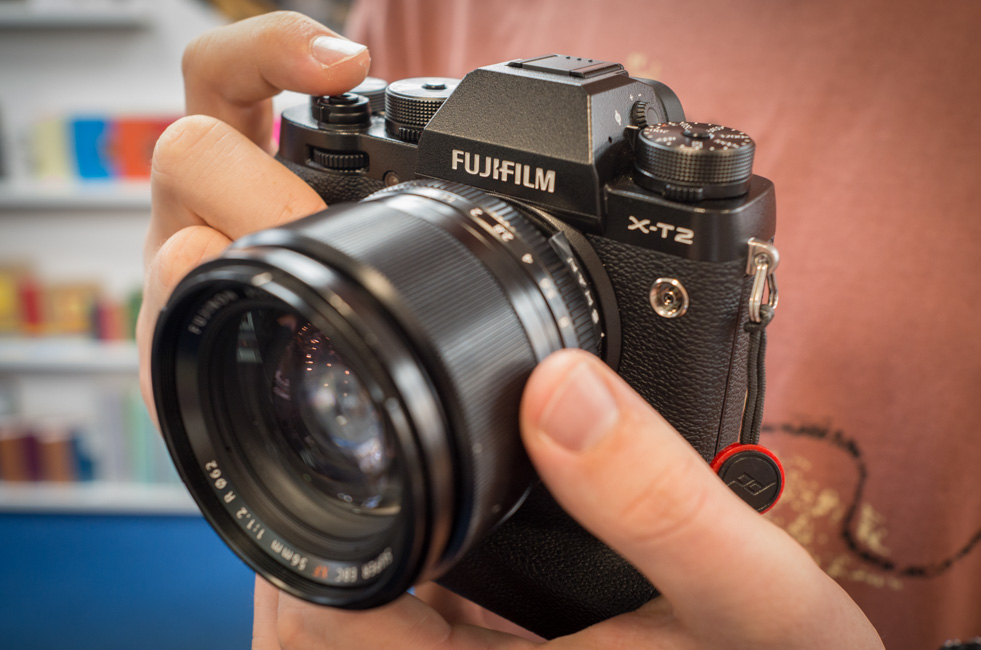