When digital photography began its steady climb to popularity, I watched from the side-lines with great interest. At the time, digital SLRs were very expensive and some of the early models felt like a bastardisation of old film lens technologies grafted onto computers. As time passed it soon became clear that digital photography was here to stay, usurping films long established legacy. 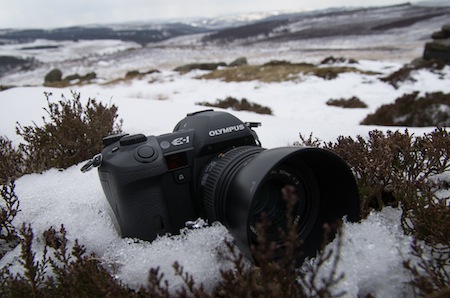 When Olympus first mooted the E-System in 2002, it coincided with a discontinuation notice for the OM System. As a long time user of OM Cameras I was very disappointed but also keen to see what the new system would bring to the table, so I waited for the announcement of the E-1. Olympus are an innovative company, and I was pleased to see that the system was being designed from ground up – no bodged legacy lens mounts but brand new telecentric ‘designed for digital’ optics and the first use of a ‘dust buster’ mechanism to keep the sensor free of fuzzies – something that I found a real pain with some of the Canon gear I owned at the time.

But even once the E-1 had been released I was reluctant to part with the asking price, so I held off for a couple of years until the price dropped to something more acceptable. By 2005 the E-1 was selling for less than half of its original price, so I jumped in. Unboxing it was a real pleasure – my first Digital SLR and it became clear that this one was created to take the rigours of daily use. The build quality is second to none and it is designed to take most of what nature can throw at it, being environmentally sealed against moisture ingress. Handling is marvellous and a real triumph for the engineers at Olympus who, sadly, seemed to have moved away from this type of design to more traditional ones (E-300 series excluded).

The same could not be said for the accompanying 14-45 kit lens also included in the box. As soon as I picked it up I could tell that it was an inferior product – lots of plastic used in its design and not weather sealed. But what could I expect for the low price paid? After just a couple of days in the field with my new toy I was disappointed. Not from the camera, but the lens; it was slow and good results seemed to be hit and miss. Purple fringing abounded in high contrast areas – something I did not expect to see much of given the system’s telecentric design.

I was careful about selecting additional lenses, as I wanted to create a tiny but fully deployable digital system, meaning that no part of it should be left at home. As the kit lens was less than inspiring, I eventually settled on the 11-22mm and 50mm macro lenses. Both give superb results, and the 11-22 is the first zoom I have ever been totally happy with in more than 30 years of photography.

Like most cameras, it does take a little while to set the camera up to produce good JPEG's, but is well worth spending time experimenting with sharpness, contrast and saturation settings until the desired result is achieved. I shoot RAW and JPEG but found that once I had tweaked the settings, the in-camera JPEG engine was so good that I rarely need to revert to the RAW format unless specifically required. Where I do, the images need very little doing to them when processed through Lightroom. 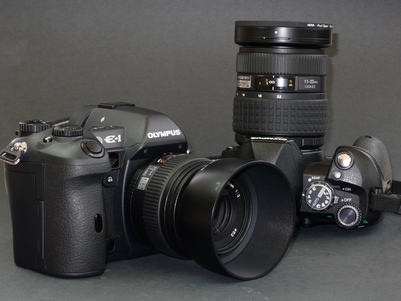 As mentioned previous, the Supersonic Wave Filter does a really excellent job of removing sensor dust. Even today, my images remain dust free so it genuinely does work. I recall when the E-1 was introduced; other camera manufacturers claimed that the technology was nothing more than a gimmick. It is interesting to see that the same manufacturers now have their own (albeit inferior) methods of removing dust. It is also interesting to note that I used a Canon 10D alongside my E-1 and had to swab the 10D sensor on a few occasions due to the presence of dust - and this was in a predominantly studio environment. It was a non-issue with the E-1.

Another important point to me is how gorgeous the colours are from the camera. They are very reminiscent of my OM film cameras and lenses. Saturation is superb without being too vivid. I have found that I have not had to use a polarizing filter due to the intensity of colour, so their use is limited to removing reflections.

The E-1's Achilles Heel has to be its noise above iso 100. This was a problem when it was introduced and I guess looks more obvious as technology has marched on. It is possible to get clean images at iso 1600 and beyond with today’s cameras. To be fair the noise issue has not posed much of a problem for me as I tend to stick to iso 100, using a tripod where required. I once took some test shots at iso 1600 and yes they were unacceptably noisy. But they did clean up nicely when noise reduction was applied during processing, resulting in a grainy film like appearance.

Out of all the Olympus E-System cameras made available since the 4-3 System was introduced, I find the E-1 to be the most aesthetically pleasing. Even at a mere 5 megapixels, it is capable of producing superb A3 size prints. Having handled most of the E-System bodies at some point I still prefer the E-1 ergonomics, although I admit this could be a little bit down to familiarity. Such familiarity means I rarely use the preview screen anymore. I once heard it said that shooting JPEG is like shooting film and throwing away the negatives. In fact, it is nothing like this at all; it is more like shooting transparency and having no negative, making it necessary to have a good understanding of photographic processes, effects of light etc. I am completely at ease with this style of shooting, and it reduces the amount of time I have to spend in front of a computer regarding the post processing aspect.

So does the E-1 still have a place in today’s digital market? Well I think a quick trawl of internet forums and user groups will reveal the answer; many are still in use and loved by their owners, and they are trading hands on the used market for prices well below that of a modern point and shoot model. I enjoy the E-1 enough to not have bothered upgrading and, even though it sees less use since I purchased my X1, I still enjoy taking it out.

Olympus seem to have moved away from Four Thirds development in the last few years. Their lens line does seem pretty comprehensive and complete, and there is no doubting that many of them are world class. So I guess there is little reason to add new ones. Some, such as the fabled 100mm macro lens never made it to production, but maybe its genetics will inhabit a m4/3rds optic. Some of the Pro Grade zooms offer unprecedented (f2) brightness which I never expected to see. Such good glass deserves an excellent processing engine behind it so I sincerely hope that further models are released to keep the system alive.

Personally, I think a new model should encapsulate the spirit of the E-1 more than previous models have. I feel that the E-3 and E-5 are too large for my use, which is one of the reasons I never moved on. They look too similar to other manufacturer’s ‘same old, same old’ offerings which I dislike. To have a E-7 the size of my E-1 (containing an OMD sensor) would turn my head and just might get me to buy into the system again.