This was one of my final OM Zuiko lens acquisitions. Having used the 135mm focal length for some candid photography, I was very aware that the distance separating me from my subjects was occasionally not quite enough. 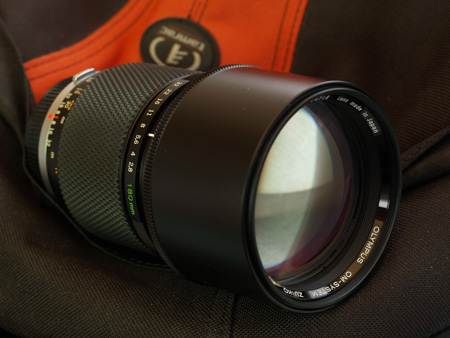 The 180mm was purchased specifically with this kind of photography in mind. I am sure that other situations will arise that I find it useful for.

It is not a light lens, but balances very well on the camera bodies. Having used the Zuiko 200mm F4 for many years, I found I always had to steady it to ensure good results. I believe that this lens (and some other Zuiko telephotos) suffered from harmonic vibrations when not steadied, thus contributing to blurred images. Not so with the 180mm; I think the additional mass provides more stability. What I really like about it is that it can be used wide open and produce excellent results with beautiful bokeh. Prior to purchase, I read that the lens exhibits chromatic aberration when used in certain situations such as backlit subjects, or highly reflective areas. I made this part of my test, by selecting a couple of highly reflective subjects in bright sunlight (the chromed areas of a motor cycle engine for example). True to what I read, chromatic aberration does reveal itself, and quite badly on close inspection of a projected slide. However, it does appear limited to these kind of conditions as all other subjects were reproduced beautifully. So long as subjects such as this are avoided, or maybe if I stop down the aperture more, it should be OK.

Interestingly, the optical design is the same as the 100mm and 135mm f2.8 lenses. I have both of these and they do not show chromatic aberration (or little enough as to not be obvious). My guess is that with the 180, Olympus reached the limitation of this particular design without either adding ED glass or reformulating the design entirely. I suppose this is where the expensive and rare F2 version shines.

As stated above, my use for this lens is primarily candid photography, therefore it should be perfectly fine.

The lens is beautifully engineered with extensive use of metal and multicoated elements. The large rubber focus grip is damped perfectly and moves smoothly to the chosen setting. The aperture ring clicks positively in full stop increments which are spaced far enough apart to set any in between setting for precise control. This is one of the few telephotos that can be used with the 1.4 teleconverter, extending its capabilities to 250mm f4. Although I have not used this combination, tests suggest that it turned in above average results. I understand that it had to be re-engineered at some point during its production run to allow this to happen.

This was the only telephoto lens I took on a recent trip to Greece, forcing me into using it for many types of photography. I did this deliberately as I knew it would be the best method of exploiting the lens' capabilities. True to my expectations it was superb in candid situations. However, it also proved very useful as a long portrait lens, allowing incredible isolation of subject from background matter when set at F2.8. I also found it useful for photographing details such as shop signs, church roofs, vases etc. In addition to this, it found its way onto a camera body for several land and seascape images due to its compressed perspective effect (olive groves, mountain ranges, to name just two).

So, several years on and having used the lens fairly extensive now, I have found it to be far more versatile that I originally thought. Colour and sharpness are second to none, especially when used in conjunction with Kodak’s now discontinued E100VS transparency film. I had some reservations regarding weight but found it to be reasonable portable, although it is not something I would like hung around my neck for more than a couple of hours each day. 100% recommended, even though it has some chromatic aberration issues under certain conditions. However, I would choose my 135 over this wherever possible.