One from the Vaults, The Ricoh GR10

Written by Steven on 25 February 2014. Posted in Reviews.

Sometimes it is good to reflect on past photo equipment as it reminds me of where I was in my photographic journey as well as what the technology was like at the time. Several years ago I ran a website called Visionage and have just unearthed a long forgotten backup of the site. Similar to PhotoArk, it contained camera reviews of what we were using back then. I thought it would be fun to reproduce one of the old articles here as I am sure there will still be GR10 aficionado’s out there, or people who are interested in a little bit of camera nostalgia. 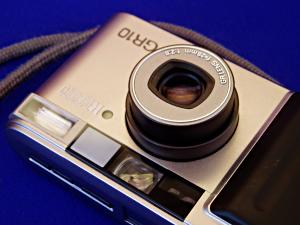 I purchased this camera as a Christmas present to my Wife, back in 2000. Up until this point, she used to use my OM gear (favouring the OM1n). However, she decided that she wanted something smaller and automated which would allow her to capture the spontaneity of children's parties and family get-togethers. There is a massive compact camera market out there, which made the task of selecting a suitable model quite a long one. I decided to base my choice on two fundamental points - lens quality and ease of use.

After looking at the usual manufacturer's offerings, I concluded that there was little to separate them from each other, with the exception of Contax and Leica which were incredibly expensive. It was at this point that I read an article about Ricoh's GR1. My attention was drawn to its all metal construction and the 28mm GR optic, which had received much praise.

The fact that it also had exposure compensation and aperture priority really interested me, but not Alison. So attention turned to its sister model the GR10, which is truly automated. Now here is a compact camera that is gorgeous to look at, has superb optics, and takes care of all exposure functions, including flash. It became an instant hit and saw Alison's photo output increase dramatically.

The GR10 is truly small, and not much thicker than a roll of 35mm film. The lens, when not in use, retracts into the body and is protected by a built in lens cap which retracts when the camera is switched on. Upon powering up, the standard focus mode is a rectangular area defined in the viewfinder and is large enough to use on a group of people. The focus area can be reduced by about 70% at the push of a button, which is really useful when wishing to select a smaller subject. It also features various modes, such as landscape, group and night-time. Coupled with this are some useful flash settings, along with red eye reduction. It has a standard tripod socket and informative LCD on the top plate highlighting frame number, mode, self-timer and low battery. One CR123A lithium cell powers the camera for ages - Alison has only replaced the battery once. 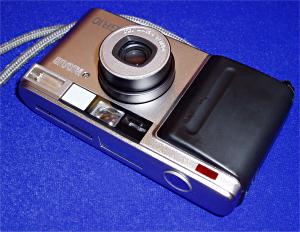 Results from the GR10 are outstanding. Where good quality film and processing are used, prints are remarkable - testament to the 28mm f2.8 lens engineering no doubt. But where it really shines is when transparency film is used. I did not think really accurate exposure was possible with a compact camera until we received back the results from a roll of Kodak EBX 100 asa film. The slides were stunning and are comparable to some of those taken with my SLR gear.

If I had one slight quibble with the camera, it is that the lens is just that bit too wide for general use. I would have preferred a 35mm focal length, but this is purely a personal comment. The 28mm lens is razor sharp, bright and great for landscape and architectural shots, so I guess its suitability depends on one's own photographic tastes.

Both Alison and I really rate the GR10. There is little to touch it in the £200 - £250 bracket. In my opinion, it can only be bettered by the GR1 (or GR21 for lovers of wide angle perspectives). Or, if money is no object, I guess Contax's G2 system would consider serious thought.

Alison now uses an Olympus digital MJU 300. Since its arrival, the GR10 languished in its box. It has since been sold as it was a shame to leave such a gorgeous camera gathering dust.