An X1 in New York City

We recently took a trip to New York City to celebrate Ethan's 21st birthday, so it goes without saying that we were going to use this as an excellent opportunity for some photography. As Ethan had recently purchased a K-3 Prestige Edition, he was keen to use it in anger and see what it was really capable of. New York was the perfect canvas for this. I opted for a very different approach; usually I would be accompanied by a SLR and at least two lenses, but this time I wanted to travel light and forcibly remove my indecisiveness when it comes to selecting lenses for use. This leaves me with just one alternative…my Leica X1. 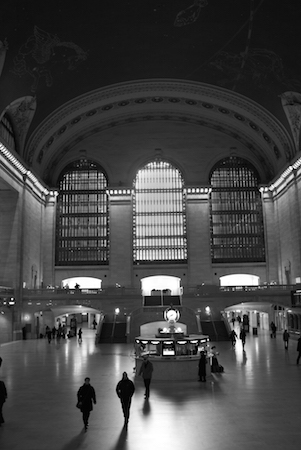 I must admit that prior to arriving in the Big Apple, I was a bit sceptical about the cameras ability to capture the scenes I envisaged – all those tall buildings – was a 35mm equivalent focal length good enough? I would usually go for at least 24mm. There were also those opportunities when I may need the reach provided by at least a short telephoto – I was going to have to approach my subjects differently.

Day one saw us enthusiastically hit the streets, albeit a little weary from the flight. First on the itinerary was Grand Central station for some much needed breakfast and a look around this iconic building. Photography wise, it soon became very apparent that we were not alone as the main concourse was busy not only with commuters, but a good amount of photographers. We walked the building's perimeter before deciding that the best overall view was from either end as this provided suitable elevation to capture the grandeur of the main hall. Slow shutter speeds blurred busy commuters adding to the feeling of urgency such a building imparts. Standing at one end of the hall allowed me to capture much of the scene but not quite all – 35mm is wide, but not enough to include its entirety. After a couple of general shots, I found myself searching out more detailed views which I found in abundance around the eating areas. 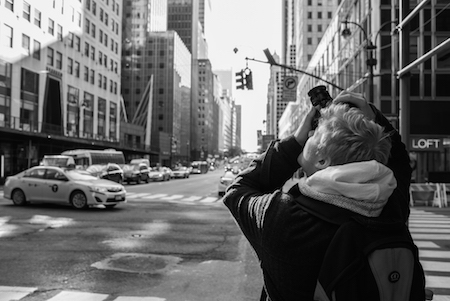 Breakfast over, today’s route took us past another icon of New York’s skyline; The Chrysler Building. Soaring off into distance its chrome top was almost lost to my camera lens. The only way I could make an interesting image was to include some of the surrounding architecture as, alone, the building was little more than a bunch of converging vertical lines. This was true of the Empire state building also, although it was possible to get to the 86th and 104th floors where the 35mm equivalent lens captured some eye popping views of Manhattan and beyond. The X1’s focal length really shone here – not too wide as to push everything into the distance, but not too narrow as to exclude interesting details. The wind really buffeted the observation deck and was incredibly cold, so we were glad to retreat to ground level for some less windy sightseeing.

After stopping by Macey’s for a little retail therapy, we continued along Broadway to Times Square. One cannot fail to be impressed by the sheer amount, size and colour of the billboards. Many years ago, Kodak exhibited a portrait of Ethan somewhere here, as part of their ‘Picture of the Day’ campaign. I didn’t see it at the time, so was left wondering where exactly it was placed. I really thought I would feel the lack of a super wide but was pleasantly surprised by how much I could cram into the X1’s frame. Ethan was taking full advantage of his 15mm lens which created some startlingly wonderful images of the square. My own efforts were more subtle and lent a very different perspective to Ethan’s work. Between us we shot a shameful amount of pictures but that did not stop us from retuning to grab some night shots and also some immediately after the blizzard that pretty much closed the city down for 12 hours. 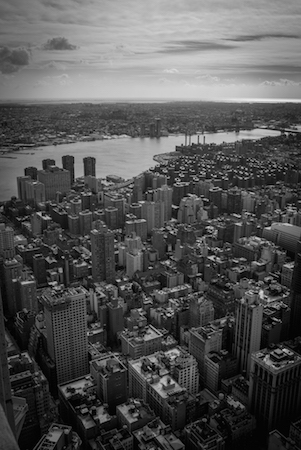 One thing my X1 does allow me over my SLR’s is to provide a discreet option for taking pictures when out dining, and it accompanied me every evening of our stay. The beauty of such a small camera is that it is never onerous and its large sensor allow me to push the ISO and capture hand held atmospheric images that are not ruined by flash.

Day two heralded a real change in weather. New York’s mayor declared a state of emergency due to an impending storm that threatened the city with unprecedented levels of snowfall. Therefore our itinerary was forced to change to allow for some potentially serious disruption. Much of our day was spend battling the blizzard conditions through Central Park in an effort to reach the Natural History Museum. I envied the ability of Ethan’s K-3 to resist the snow that was falling on it due to its awesome weather sealing. My X1 sports no such luxury, so I found myself hiding it under my coat when not taking pictures. This was not how we envisaged photographing Central Park, but I cannot help thinking that the images we did capture were a little more unique that those taken on a bright day; snow was blowing horizontally across the park and the tops of many of the taller skyscrapers were lost from view due to the snow’s intensity. The Natural History Museum was a welcome site and our time was spent looking and photographing the dinosaur collection mostly – something I have wanted to do for decades. The X1 was limited in its use here as the rooms were not large enough to allow me to stand back far enough to get larger skeletons in. Therefore I found myself cropping heavily and concentrating on more detailed views…dino portraits I guess. 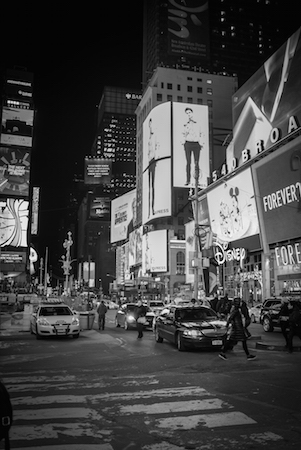 By the time we left the museum, the blizzard had intensified as we tried to retrace our steps back through Central Park. We took a few more stormy pictures but our minds were really set on getting back to our hotel and thawing out as the city shut down for the night.

Day 3 revealed a snowy cityscape, although fortunately for us we had been spared the brunt of the storm and had just several inches of snow to contend with. We wasted no time walking to Times Square to witness a pretty unusual event; A landmark almost devoid of traffic and populated by only the bravest (or stupid ☺) of souls. We set to work bagging images before the snowploughs arrived as we realised that, as tourists, we were witnessing something rare. The cold temperatures really took their toll on the X1’s battery life and I was changing them far more frequently than in warmer climes. Ethan’s K-3 soldiered on with the same battery as he had been using since arriving.

After finding an open diner for breakfast, we endured the biting winds and headed for Ground Zero. The wind chill here was even worse and it added to the malevolent atmosphere engulfing the morning. Due to the snow, the entire area was disappointingly cordoned off and the museum was closed due to staff shortage. We had to make do with generic views of the memorial gardens and pools, taken from a distance. Little in the way of lens changes would have helped improve the lacklustre images we captured, so I came away strangely satisfied that my Leica’s performance was not limited by its lens. Witnessing this site, even 14 years after the horrific events, left us in a sombre mood, but the new Trade Centre towering above us offered hope for the future. 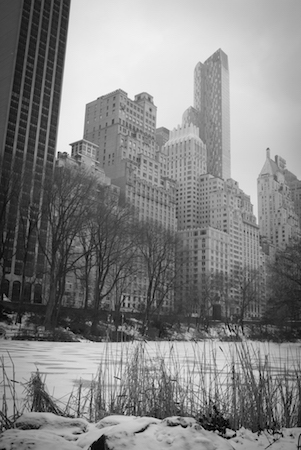 Madame Tussauds made an excellent sanctuary from the howling wind, and provided some amusing photo opportunities. One thing I learned very quickly about photographing wax dummies – don’t use flash! It transforms them into unrealistic mannequins. Manually setting the colour balance and pushing the ISO to 800-1600 allowed for far better images.

No trip to New York would be complete without experiencing a Broadway Show and we simply had to comply. Sadly, no cameras were allowed in the theatre so the only records we have of the event are ticket stubs, programs and some wonderful memories.

Day 4 dawned beautifully blue and incredibly cold. First up was a trip postponed from Monday’s itinerary; Manhattan by helicopter – a gift within a gift for Ethan. Weather conditions could not have been better…beautiful snowfall surrounding lofty skyscrapers. Our allotted time was early in the morning when the sun was still pretty low, its rays picking out details in wonderful contrast, although occasionally lost photographically due to shooing through the helicopter windows. 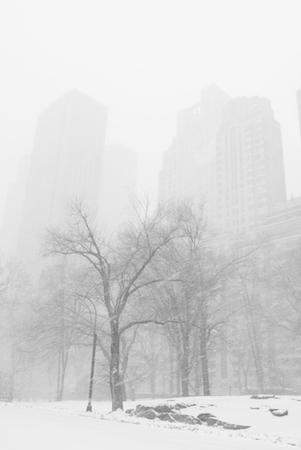 The 15 minute trip included the usual tourist sites; Brooklyn Bridge, Statue of Liberty, Ellis Island, USS Entrepid and the areal grandeur of the city. I must admit, I thought my choice of camera would really come up wanting now, but I managed to capture some really pleasing cityscapes from the more unusual angle that a helicopter offers. Ethan’s 20-40mm lens was born for this kind of work.

Our final sightseeing destination before boarding our flight back to the UK was Liberty island. There was a little reluctance to board the ferry as the wind chill was incredible. Even through Paramo walking gear and fleece lined shirts the cold seemed to penetrate my bones. I really thought my camera would dislike the intense cold but it continued functioning fine with the exception of battery drain which had significantly increased. We stayed on the island just long enough to walk once around it and capture very standard but beautifully lit pictures before boarding the ferry back to lower Manhattan. The journey back made for some excellent bonus pictures of the city’s financial district with the 1,776 foot tall One World Trade Centre dominating the skyline.

Reviewing my images from the warmth of a cosy living room back at home, I could not help but be impressed with the results delivered from my little X-1. In almost all situations I have managed to make use of the fixed 35mm equivalent focal length and was not left with a feeling of regret from not taking a DSLR on this trip. Yes there were those moments when I looked on at Ethan enjoying the vista of Times Square through his 15mm lens, and his ability to pull in some architectural detail courtesy of his telephoto lens. But while he was doing this, I was forced to re-think how I was going to capture the scene. Whether this worked or not is for the viewer to decide I guess, but I stand by my choice of equipment. What it lacked in lens versatility it more than made up for with its tiny footprint and beautiful image rendering. If I could do the trip again would I take a different camera? Nope, I absolutely loved my time spent with my X-1 and it was unobtrusive enough to accompany us out in the evenings without getting in anyone’s way, therefore allowing us to capture more personal images than I would usually.