The End of an Era

One of the greatest photographic pleasures in life is to see a well exposed, well projected slide and more so, if it is an image that you have created yourself. I have been using 35mm slide film for decades now, both professionally and personally, and my enthusiasm for it has remained constant. There is nothing like receiving a box of transparencies and holding them up to the light for the first time. In this world of binary data, a slide is something so tangible – almost magical, with almost a feeling of a bygone age.

I write this occasionally glancing down at my desk, at a small box of yellow and blue with a ‘best before’ date of October 2013. And I realise that this could be the last batch of Ektachrome E100G I am likely to be able to get hold of. The news came, early in March 2012, that Kodak was discontinuing all of their slide film. Bad news for me, as I have used Kodak’s E100G, E100VS and Elitechrome EBX exclusively for many years. Kodak assured us that there are sufficient supplies of film to last several months, but I have noticed that stocks are already exhausted at some of my suppliers. 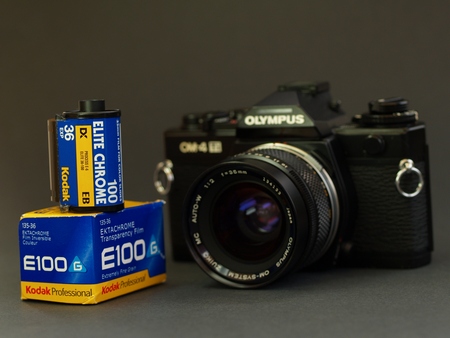 I have never been one for keeping much film lying around, so I have had to start buying up some stock and freezing it for future use, and my latest batch will be joining the rest in a cryogenic slumber. I have, over the next two years, two large projects I planned shooting with Kodak’s last generation slide film and I have just about collected enough stock to do this. Beyond this? Who knows; But if I intend to continue using slide film, I will need to start experimenting with Fuji or Agfa offerings.

Kodak’s decision to discontinue their slide films is saddening, but I guess expected in these days of digital favouritism. Given they kept production going for this long is commendable. But part of me is wishing they would have found a means to have kept at least one emulsion alive, even if it came at a higher cost to the consumer. But if that was the case, which one would I choose?  E100G is fine grained and offers punchy colours without being over the top. Blues are reproduced beautifully. E100VS and Elitechrome EBX are far more saturated with EBX being the slightly warmer of the two, and great for those moments when only punchy colours will do. I guess I would pick E100G, as I could always use a polarising filter to add extra saturation. And it’s fine grain structure is spectacular.

My real fear is that sometime, in the not so distant future, both Fuji and Agfa will follow a similar path to Kodak and the world will be without slide film for the first time in 76 years. Now that would be the end of an era.