Cheedale…the name given to a narrow section of a carboniferous limestone gorge complex that runs into the more popular Millers and Monsal dales, carved by the waters of a juvenile river Wye. This is an area of stunning natural beauty and interesting geology, feeling a world away from the nearby market towns of Buxton and Bakewell. When viewed from the area around Chee Tor, it can almost be seen as a vertical slice of humanity, underpinned by long dead epochs. At the top are the pastures so important to modern farming, our villages and farms interconnected by modern roads and ancient packhorse trails.

A little further down are the feint traces of a Romano-British settlement, reduced over the millennia to nothing more than a few humps and hollows that are difficult to see, even from the air. Nearby hills are testament to human occupation before this, in the shape of Neolithic burial mounds and chambered tombs such as Five Wells. Field walking occasionally reveals flint scrapers, knives and arrowheads from these ancient cultures. Next are the deep strata of limestone, remnants of billions of marine creatures compressed over time by intense geological pressure, whose lives were played out in what was once a shallow tropical sea. Seismic activity and erosion over hundreds of millions of years give us the views we see today, and the echoes of explosive eruptions from extinct volcanoes can be viewed in railway cuttings south of Millers Dale. Cut through the rock are railway tunnels constructed in the 1860’s along with a network of supporting bridges and viaducts. The rumble of trains has long gone, their ghostly existence betrayed by soot clinging to damp tunnel walls. Rusting track has been removed to make way for recreation in the form of the Monsal Trail, which attracts thousands of cyclists and walkers annually. Through shadowy cool depths runs the Wye, its eroding qualities going unnoticed by man’s fleeting presence. 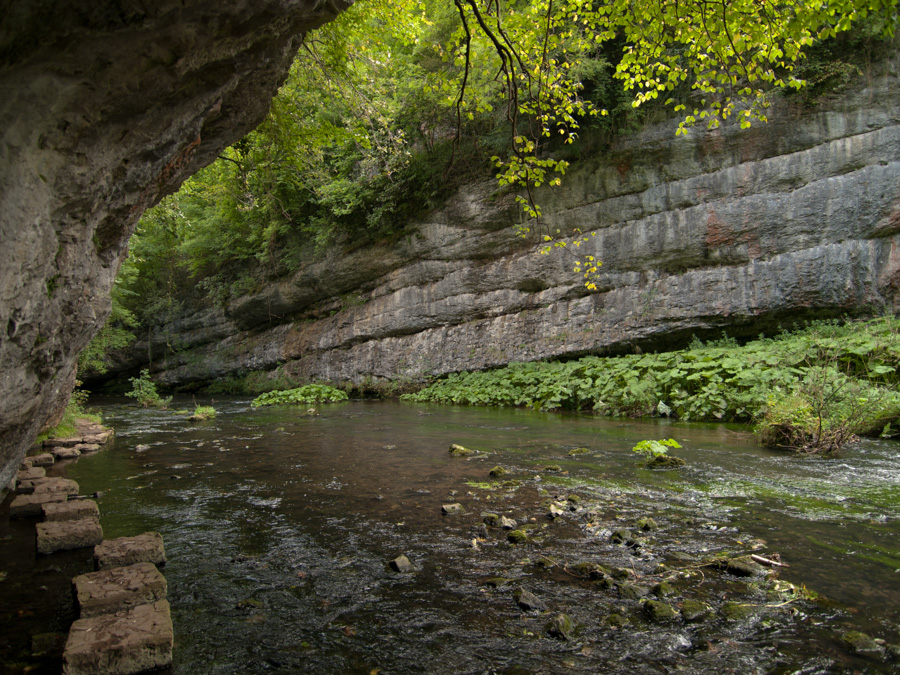 Curiously, although this is my favourite walk it is not my favourite photo walk. It is an area I simply like to walk through to purge my body and soul of modernity and the stresses of daily life. I always take a camera with me but find that it sees significantly less use compared to other walks. Ironically, subject matter is boundless with almost every twist of the gorge opening a new vista waiting to be photographed. The area is suitable for scenic, macro and wildlife work, and particularly photogenic in late spring and early summer. Cheedale sees far less foot traffic than the more popular dales a little further south, no doubt due to its more isolated location and the roughness of the path. I would hazard a guess that more climbers frequent it than general walkers. The path is difficult in many parts, comprising of slippery uneven and wet limestone along with sections of general muddiness interspersed with tree roots. It is not uncommon for parts to be submerged beneath turbulent water during times of heavy rain and because of the hazards, I do not recommend the route during winter months particularly as ice will add a whole new level of hassle.

There are a few access points into Cheedale, the most popular being either from a small car park off the A6 opposite Topley Pike Quarry or from Millers Dale station, where parking and toilets can be found. Now that the tunnels along the old Monsal Trail railway line are open to the public, an excellent circular walk can be made by utilising the old railway path one way and following the riverside the other.

Distance wise, the walk is not far and it takes less than an hour to amble along the trail from Millers Dale station to Topley Pike car park. But when following the river, walking time can be easily doubled as the pace is much slower and the route less direct. 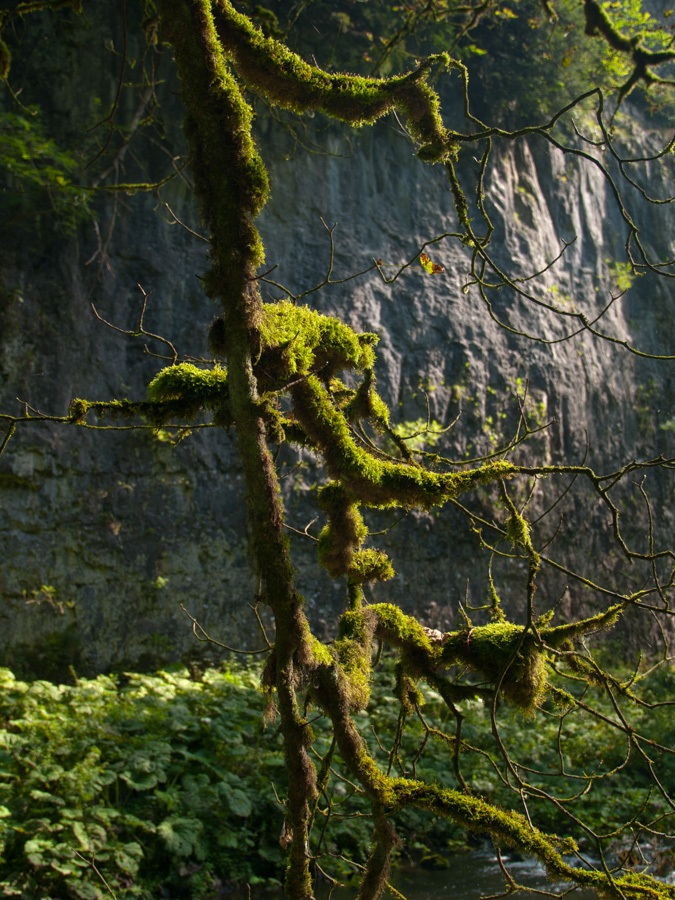 For those who find car parking charges offensive, it is possible to park in a large layby on the A6, just south of Topley Pike. No charges apply here which is why we always use this as our start point. An excellent food van also frequents the layby whereby hot drinks and warming butties can be purchased. There are good views toward Wormhill and into the dale from here. Blackwell Cottages and the railway line threading it way from Tunstead Quarry make interesting studies and are particularly suited to telephoto lenses.

Assuming this as a start point, a steep path at the southern end of the layby leads down grassy slopes to the valley below and onto the trail. Turning left here the path can be followed until it leaves the old railway and heads for the river. Following the river south along an unmade road eventually leads the walker to the picturesque Blackwell cottages, the location of which are idyllic. It is a simply a matter of following the path along the river as it narrows between soaring crags and buttresses echoing with the cry of Crows. Photo opportunities abound from here on in – water, overhanging foliage and pale limestone combine to produce almost primeval scenes which are to be enjoyed not just through a camera lens, but by simply stopping, cracking open a flask of coffee and absorbing the solace. We have a couple of favourite coffee stops along this section, situated between rock face and river and almost overwhelmed by nature. Man’s influence is not totally absent though; every now and then a Victorian brick arch soars overhead which once supported the Matlock to Buxton rail link. Closed in 1967, and now supporting the Monsal Trail.

A highlight of the walk is where the dale narrows to the point whereby the path is replaced by a series of stepping stones, as the route winds its way along the river. Beware during times of flood…these are submerged making the route impassable. If the route is quiet, some great wide angle images are possible of the stones leading off into the dale, particularly when taken from a low perspective. 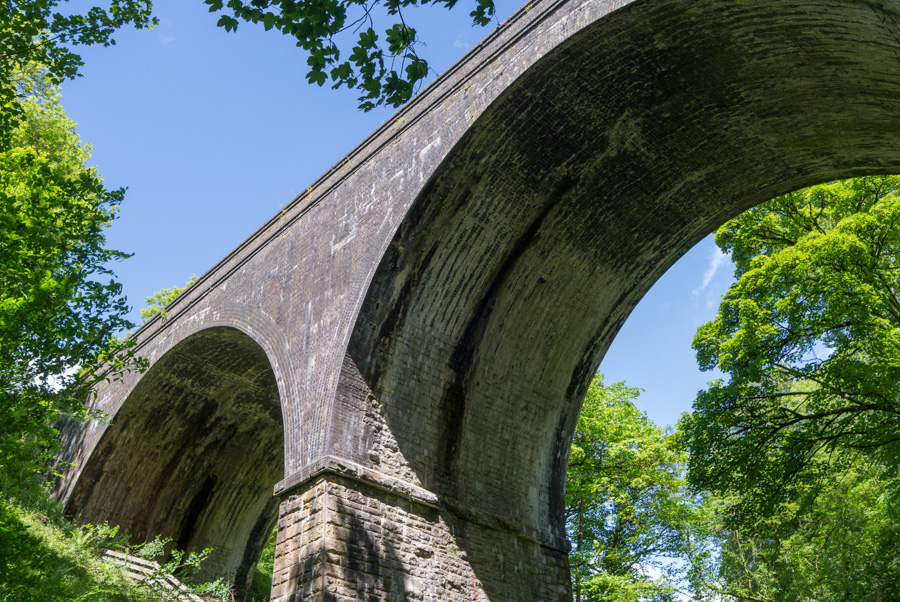 Beyond the stepping stones, limestone buttresses overhang ominously, casting the dale into deep shade for most of the day. Consequently the area is very damp and slippery forcing the walker to keep their eyes ground ward. It is very easy to slip here (as I have found several times), particularly when loaded with photo gear and distracted by image composition. This section attracts climbers so it is possible to break away from nature photography, change to a telephoto lens (if not already used for capturing bird or wildfowl images), and grab a few action shots of sinewy bodies powering up millennia old limestone. If you are lucky enough to arrive here when it is devoid of other people, and particularly in the summer, it is not difficult to imagine that you have wondered into a time before humanity walked the earth, a time when the Jurassic is present and its associated fauna could lumber into view.

The path becomes far muddier at this point and the walker has to scramble up and down steep banks to maintain the journey south. Fallen trees sometimes add to the pandemonium but can be exploited photographically as they provide foreground interest that helps composition with super wide angle lenses. For a short section, the path follows the Wye at a height of around thirty feet and looking into the clear rock pools below, it is easy to spot Rainbow Trout searching for their next meal. 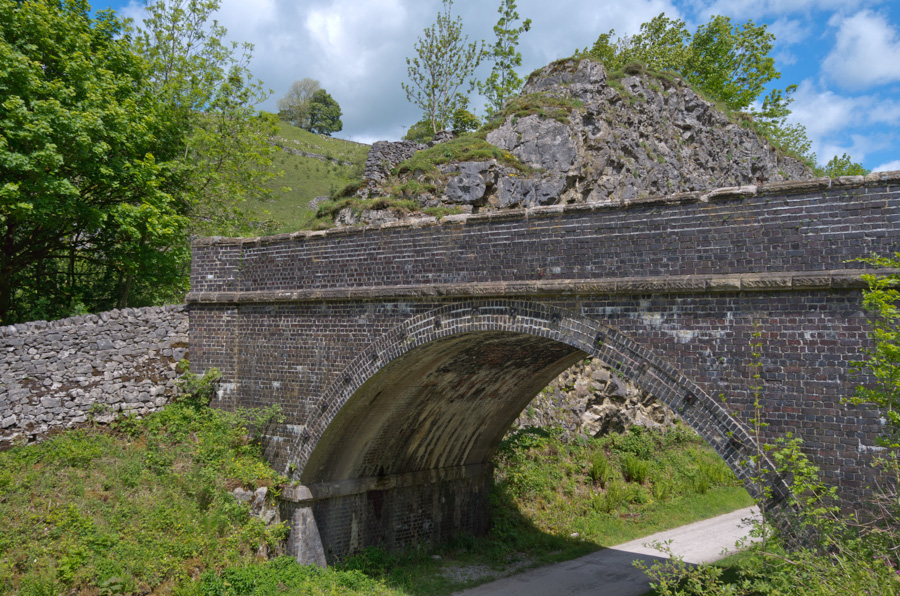 Gradually, things start to improve underfoot as the dale widens a little and soon the path enters almost meadow-like terrain as the cliffs recede. A footbridge allows the walker to cross and head uphill to the trail where they can either return to the beginning of the walk by turning right, or head left a little way to Millers Dale station. We tend not to cross the bridge but continue along the riverside path until it reaches the main Tideswell road. Here it is an easy walk up to the old station building at Millers Dale which is very interesting photographically. It is also worth exploring the old viaduct a few minutes away as it not only offers vertigo inducing views to the river and road below, but its faded and peeling architectural beauty is well worth sacrificing a few frames for. From the station we follow the trail back through Chee Tor tunnel to the starting point, just below the layby. The tunnel itself provides some interesting photo opportunities; groups of cyclists in silhouette taken from the inside looking out, solitary ferns growing near the entrances, crumbling brickwork lit obliquely etc.

I recommend allowing at least four hours to complete the circuit. It is not a long walk in terms of mileage, but is difficult underfoot in places. Couple this with inevitable photo stops and those times when it is just nice to stand and stare, and time soon slips by. It is not a walk to simply yomp through, but one that demands a slower pace. To walk here is to walk in Derbyshire’s heart and, for me, sums up the county’s natural, historical and geological beauty. Often quiet, occasionally treacherous and always spectacular, this remains by far my favourite Derbyshire walk.