For this walk, we took a complete departure from our usual Derbyshire haunts and discovered this stunning hike along some of the Amalfi coast’s most spectacular scenery. This is not a walk for those who are afraid of heights as some sections of the path cling perilously to vertiginous cliff walls, so it goes without saying that a certain amount of sure footedness is prerequisite. 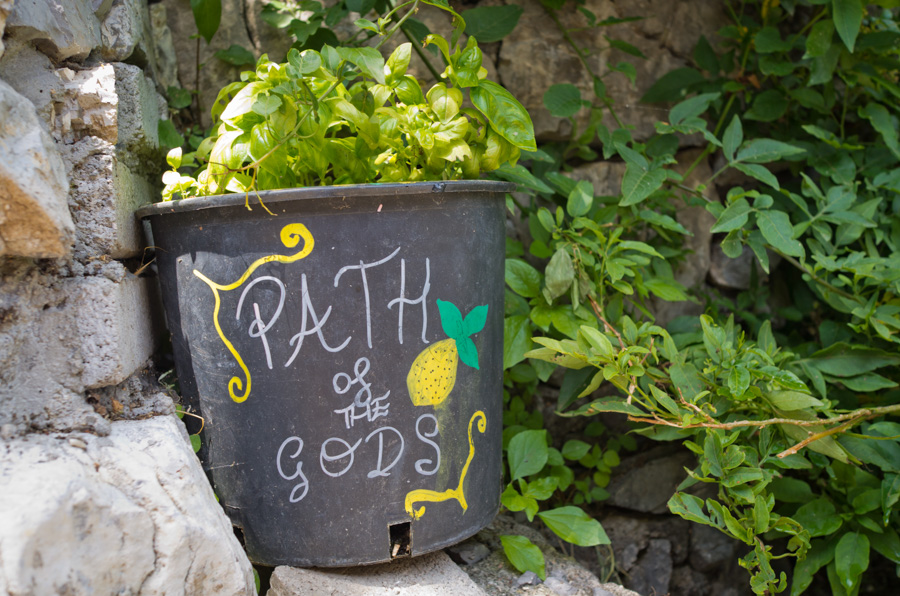 There are a few different access points demanding varying degrees of fitness; when starting from the towns of Positano or Praiano the walker is faced with hundreds of steps to reach the path, while other more elevated starting points such as Bomerano avoid this but are not served as regularly by local buses. Whichever route is taken, the trail is a fairly easy walk once the ascent is out of the way. Depending on the time of year, it can be an extremely hot walk so we cannot emphasise enough the importance of taking plenty of liquids along, as well as a picnic to keep energy and spirits up. Sensible shoes, sun cream and a hat are also very important.

Even though the walk is only around eight kilometres long, allow at least five hours to complete it as this gives sufficient time to rest, eat and photograph the wonderful views that reveal themselves with the path’s every twist. During summer months it is also wise to start as early as possible so that the ascent is behind you before the heat of the day builds.

Using a local bus departing from Sorrento, our starting point was a set of steps and steep path opposite the Hotel Smeraldo, located at the northern (closest to Positano) end of Praiano village. It is well worth spending some time in the village before setting off as it offers interesting photography, including the picturesque church of San Gennaro. The path is signposted and waymarked as it climbs steeply above, offering glimpses of rooftops as Praiano is left behind. High above, towering limestone cliffs puncture the blue, tantalising the walker with grand expectations. 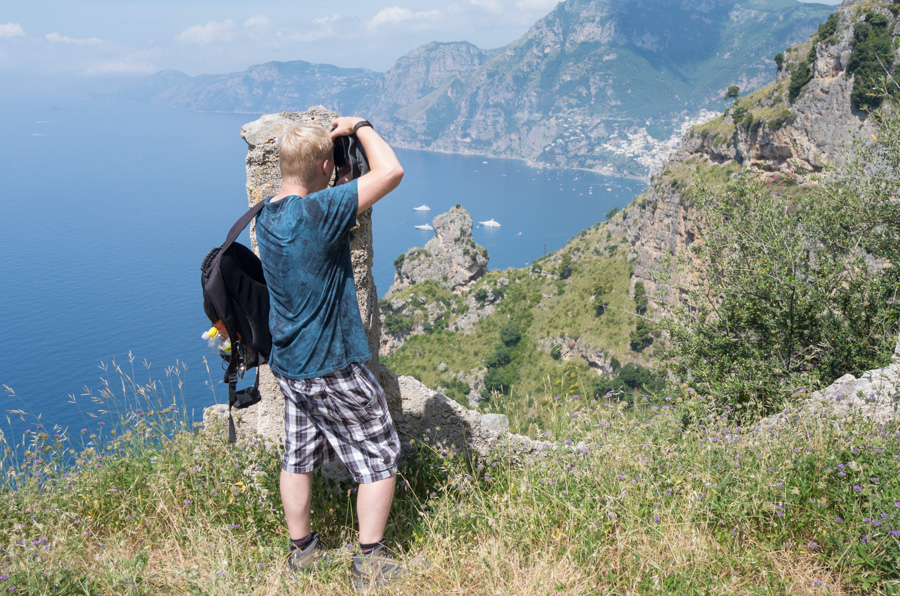 There is no doubting that the ascent is tough on the knees; approximately one thousand steps intercut with steep path sections have to be endured before things get easy and, coupled with the rising heat, soon had us reaching for water bottles and draining the first couple of litres. Vests became sweat soaked within thirty minutes which, in turn, soaked through rucksacks. Our eyes stung with lost salts as we picked our way steadily upwards. It would have been easy not to have taken many photographs during this section, and focus on reaching the main path. But to have done so would have resulted in missing some wonderful views over Praiano and out to sea. Dotted along the path were some surreal carvings and a couple of shrines that offer the photographer a change of subject matter.

At around 360 meters and after 45 minutes of walking, we reached the stunningly picturesque Convent of St. Domenic. It is perfectly located as a rest stop, offering plenty of shade and incredible views of the coastline. It is also open to the public (although not permanently occupied) and well worth taking time out to explore. Some of the frescos date back to the 15th century, so push the ISO and grab a few atmospheric shots. Many of the rooms can be explored, each one offering different views from its windows. We spent longer than anticipated here but came away with some excellent images – one of them being my favourite from our entire holiday.

From the convent, the path heads across a flat area before ascending again, only now things got more rugged. High above, we could see a line of people traversing laterally across the top of a cliff. A quick look at the map suggested that what we were looking at was, finally, the Sentiero Degli Dei – the Path of the Gods. Shade now became a luxury and an abundance of lizards skittering before us providing an impromptu escort. 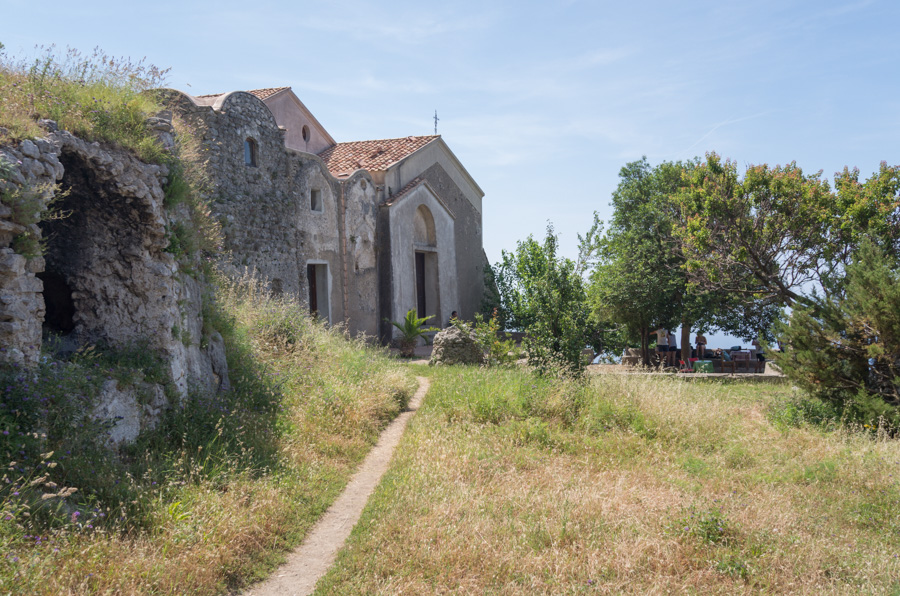 It was with some relief we reached a signpost confirming our arrival on the trail. To our right the path undulated towards Bomerano but we turned left in the direction of Nocelle and Positano, our destination. Walking immediately became much easier but busier as we joined many other people enjoying spectacular views of the Amalfi coast. It is difficult not to keep pressing the shutter button along this section as the views, particularly toward Positano, are stupendous. As the path is fairly easy going, it is a far safer place from which to take pictures, although there are sections where it runs along cliff edges (itself making for some awesome images). With such alluring seaward views, it is easy to forget to gaze upwards at the soaring limestone buttresses and miss some good photo opportunities; small ruined buildings that dot the mountainside make great foreground interest to a majestic backdrop (see July’s image of the month).

When we walked the path, the weather was hot with little cloud cover. I was told that it is very atmospheric when cloud shrouds the path and higher altitudes as, when the cloud parts, the dramatic landscape is intensified by mist and fleeting moments of clarity.

The path twists and turns for several kilometres and, unless there is an underlying urge to complete the walk quickly, is worth slowing the walking pace and soaking up the surroundings – not only through the camera lens. Occasional picnic benches are dotted along the way and if these are in use, there are plenty of rocky outcrops to perch on and enjoy refreshments. 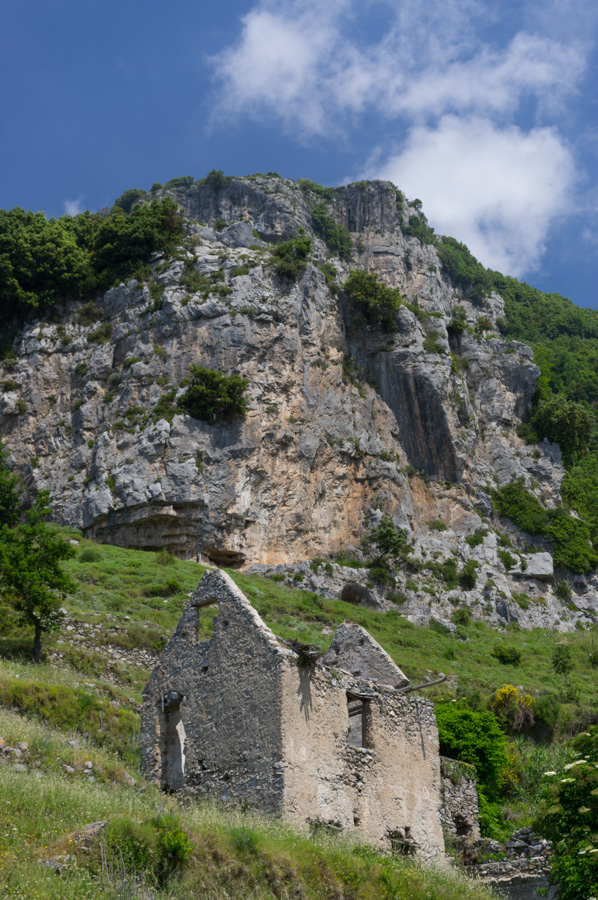 One of our favourite sections was towards the end of the path. Before reaching Nocelle, the path descends into a densely tree covered ravine. The coolness is welcome relief and the air filled with birdsong. A solitary picnic bench here was untaken, so we used it as a stop to rest and have a snack. Sitting quietly, lizards emerged from the undergrowth and were soon scurrying close to our feet, although easy scared by the sound of camera shutters!

In less than a kilometre we reached the hamlet of Nocelle and a welcoming café with beautiful seaward views. Not wishing to miss the chance of a revitalising cappuccino freddo we immediately found ourselves at a table enjoying both freddo and the view.

From this point, the walk diverges; two routes lead to Positano - one continues along the mountainside and drops down into the town from behind. The other takes a more direct descent via around 1700 knee shattering steps and joins the road at the town’s eastern edge – we opted for this. Hot and aching we arrived on a busy Positano beach where the sea provided soothing relief to our feet. If you have the energy, this beautiful town is waiting to be explored and photographed. We decided to leave it for another day and spent the remainder of the afternoon eating pizza in a small trattoria overlooking shades of azure. I swear pizza never tasted better and neither had the accompanying Moretti. Not wishing to endure the scrum of the local buses, we returned to Sorrento via a more relaxed jet ferry.

We cannot underestimate the beauty of this walk, which is why it has made it into our Photowalk pages. It is unconventional when compared to the rest of our walking material but, if you do find yourself in this part of Italy, put Il Sentiero degli dei on your itinerary…your knees will not thank you for it, but your camera certainly will.