Written by Steven on 13 February 2018. Posted in Photo Walks.

This article is a companion to the one written about Win Hill, and is for those photographers who enjoy walking in the Dark Peak area of Derbyshire. Stretching for many miles along and above the Ladybower, Derwent and Howden reservoir complex, this stretch of ancient gritstone defines in many ways the properties of the High Peak. Blanket bog, sculpted rock outcrops and moorland…its mournful atmosphere concealing the ghosts of several aircraft wrecks. This is not an area I particularly like walking due to the depressing nature of the landscape; each time I visit, its essence seems to permeate my soul staining it with an unquantifiable darkness that requires exorcism by sleep to disperse! Having wrote that, there is no denying its photographic interest, which is the only reason for my occasional return. 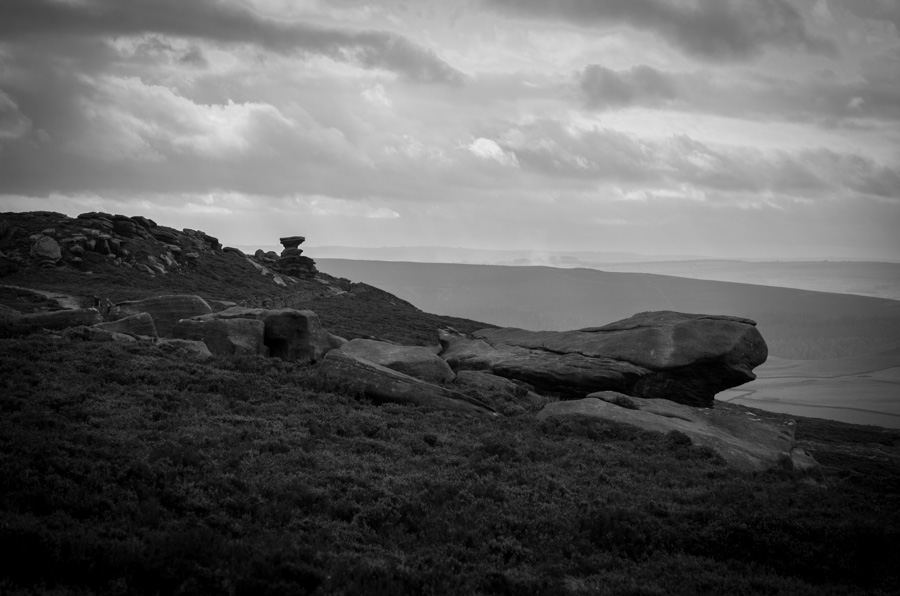 It is an area to be photographed in all seasons, but common sense should be used in poor conditions, particularly winter. Summer storms should also be treated with caution as lightning strikes are common and on more than one occasion I have had to retreat downhill when a storm breaks, due to the proximity of lightning. I have also spent tented nights being battered by squalls for the sake of photography and the chance to capture those illusive properties which conspire to make a good image.

The area is served by many paths offering varying levels of strenuousness and distance. In my opinion, the best access points are from Ashopton Viaduct, Cutthroat Bridge or Strines with the former being the steepest ascent to the top. This is the route I usually take as I enjoy the exercise, height is gained very quickly and I can arrive at the ridge in about thirty minutes with burning lungs. I particularly like this route when the valleys are filled with fog as I can fast be above the inversion layer, giving me more time to capture some pretty atmospheric wide-angle scenes. Low winter sun adds to the magic, raking the landscape with golden light while highlighting gritstone outliers.

Derwent Edge lends itself well to super-wide angle images, but care needs to be taken to ensure composition is interesting. For example, using a 17mm lens allows a huge vista to be captured. But when reviewing the image, the majesty becomes lost due to the expansive nature of the lens, therefore it is important to seek out foreground detail to add interest and lead the viewers eye into the scene. Derwent Edge has no shortages of subject matter for this; the most obvious is to use one of the many wind scored stones that litter the area. The Salt Cellar boulder is a particularly photogenic one due to its proximity on the edge. The larger Cakes of Bread, Wheel stones and Hurkling stones are set further back, and sculptured by the elemental assault of wind, rain and ice through countless aeons. 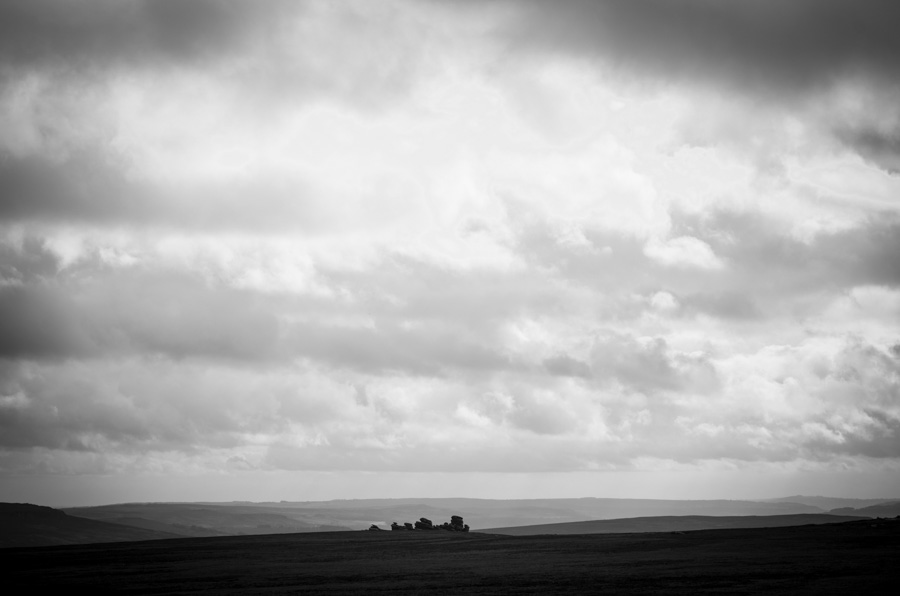 I have occasionally spent two days walking along this edge, pitching for the night beyond Margery Hill or at the Horse Stone. This allows me to capture atmospheric sunrise and sunset shots for which a night out is pre-requisite due to the area’s remoteness. More recently I have limited my walks in the area to one day and usually amble as far as Lost Lad before heading back down into the valley. From the trig point at Lost Lad it is possible to capture 360 degree panoramas which look particularly spectacular when there has been a dusting of snow. A long telephoto lens is also useful for compressing the perspective of distant features – and equally useful for when a surprised Grouse or Artic Hare stray into view.

When descending from Lost Lad toward Derwent Reservoir, the path runs close to several old drystone walls, mostly in a state of tumbling decay. Given the correct weather and lighting conditions, they make interesting foreground, leading the eye into the landscape. I find the use of a standard focal length (i.e. around 50 degrees) set to a narrow aperture to be most suitable as this ensures that the background is not pushed back too much while retaining detailed foreground interest. Occasional weather ravaged signposts make good studies; two in particular capture my attention as they are conveniently placed against fine views of the edges or vistas down the valley toward Ashopton Viaduct.

A steep descent back to the valley floor gives excellent opportunities for a plethora of landscape images, and any focal length goes. I have used everything from super wide to long telephotos on my many visits, depending on lighting, weather conditions and mood. Here I particularly like to use a short telephoto to capture aerial views of old barns in the fields below me. 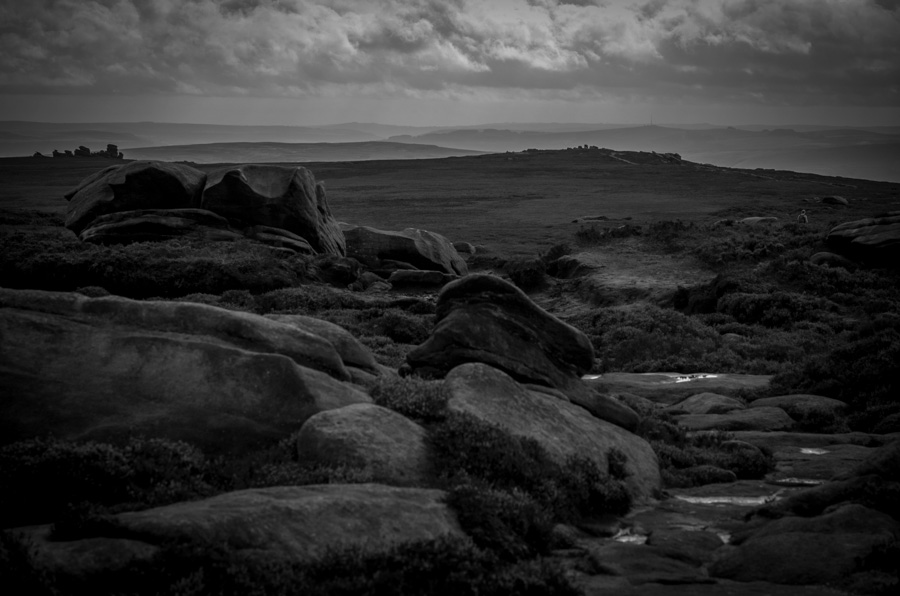 The path eventually leads down to Derwent Village, long drowned since the creation of the reservoir complex. On days when water levels are low, skeletal remains of buildings occasionally poke through the water’s surface. Usually though, little can be seen of the village other than stone gate posts that once lead to the old vicarage, a few foundations and a sign explaining the site in more detail. Views of the drowned village have consistently alluded me, but give me a reason to revisit the area in the chance I get lucky.

From here, my route usually takes me along the surfaced road toward Ashopton Viaduct, back to where I parked. The woodland running parallel to the road here is worthy of occasional sorties and is particularly rewarding in autumn. Also during rare bitterly cold spells the reservoir sometimes freezes over allowing for the creation of stark moody images when cloud levels are low. I recall a snow storm challenging me while photographing the area in these conditions and it gave me a few minutes of unique opportunities before a complete whiteout called an end to the day.

For lighter subject matter, the Canada Goose population provides great entertainment (not for the geese) to either photograph or watch, as they slide their way around the ice when taking off and landing. The show also makes a good aperitif ahead of an excellent meal at the Ladybower Inn. 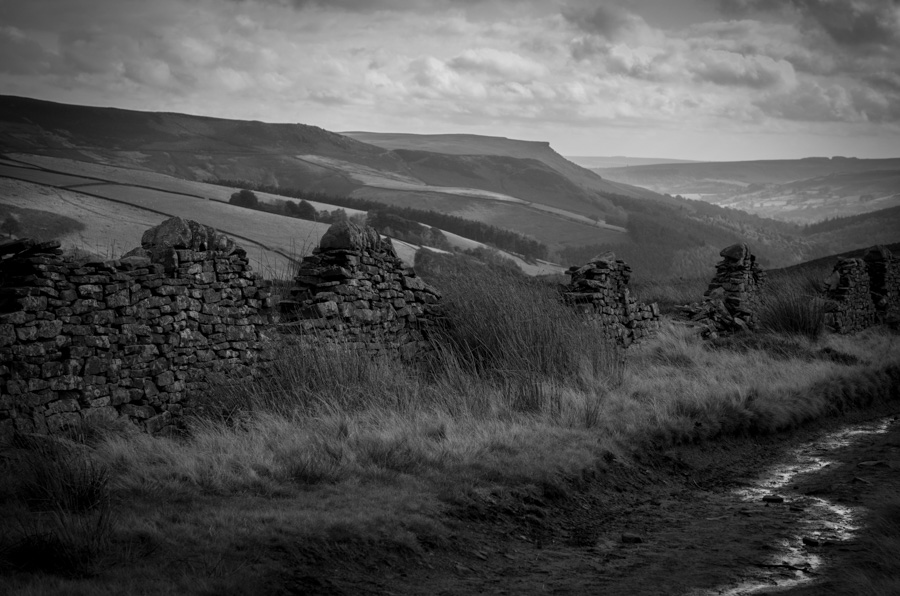 This is a route that rewards photographers who revisit the area regularly through the seasons and different weather conditions. While a session here occasionally eviscerates me with a sense of doom, I am often pleased with the results. On gloomy days or those when turbulent skies seem to be heralding the rapture, I shoot with monochrome in mind. On clear early summer mornings, ‘chocolate box’ postcard images are within easy reach. Bright autumnal conditions allow me to create images that showcase nature’s spectacular arboreal palette.

It has been many years since I used this area as a stepping stone to reach isolated areas where I would pitch a tent overnight, in search of solace and illusive images. Such visits reveal the true spirit of the Dark Peak but demand more legwork and a much larger rucksack. My day-long sortees occasionally see me glancing towards those once visited outlying areas, before I descend back to civilisation. Sometimes they evoke a longing to return and spend nights pitched near aircraft wrecks while listening to the amusing gibberish emanating from distant Grouse. Mostly though, I am happy to return home and rustle up a good curry to rebalance my mood.