This is a walk of two distinct parts which splices high open moorland with lusher woodland and tumbling waterfalls. For a landscape photographer, it combines some of the best aspects of the Peak District and is an area that rewards walkers and photographers alike at any time of the year. It is particularly appealing during late autumn when the beech woodland of Padley Gorge is transformed into a coppery palette and the last days of summer swirl in the brook’s backwaters. 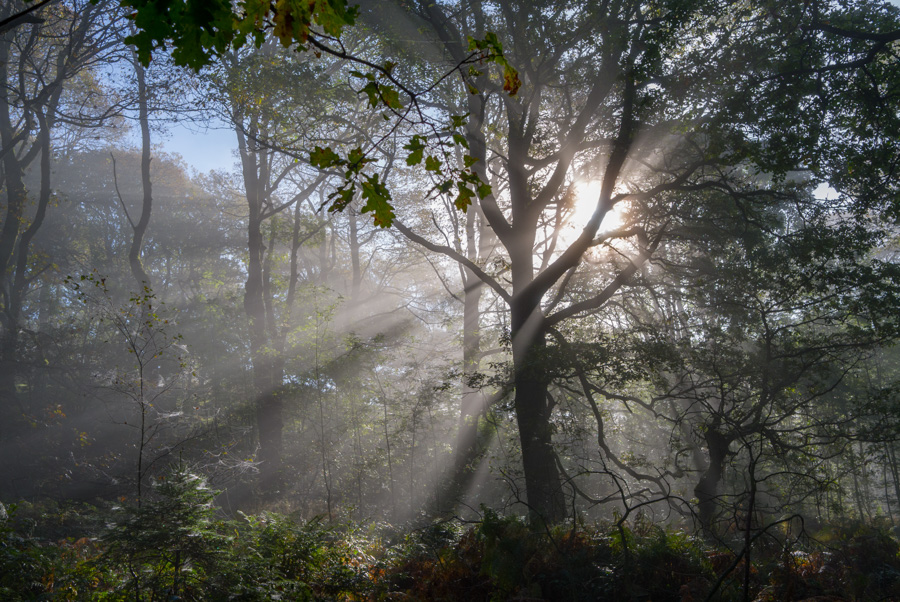 If walking in this area during winter, it is important to prepare for all weather conditions. The gorge is very sheltered which can lead to a false sense of security as you head for the more exposed areas. It is not uncommon for the lower reaches to be still and silent while the Tor is a frozen wilderness under a few centimetres of snow. Ideally, allow a full day to explore the area in full as this will allow plenty of time to capture spectacular images or simply site and take in the surroundings. It goes without saying that the days are shorter in winter so, to avoid any calamities concerning boggy ground and wet feet, allow sufficient time for the return journey while daylight permits and always carry a map or GPS – this article is not intended as a walking guide.

There are several access points to the area, making it very easy to cover specific areas if required. The four main ones are;

My own preference is to start at Grindleford Railway Station. Parking is free and plentiful, assuming you arrive early. I also like to follow Burbage Brook through the woodland as it climbs higher. There are some excellent waterfalls, making great photography at any time of the year. I know it is a bit cliched, but here you will find several opportunities to practice imagery of cotton wool water falling over slabs of gritstone, by means of long shutter settings and small apertures. A tripod is your best friend for this kind of work as it frees you from the limitations of Image Stabilisation (remember to switch this off if using a tripod). Depending on the type of image you are intending to create, almost any focal length is suitable. If taking autumnal images, I tend to favour my wide angle zoom as this allows me to frame waterfalls with autumnal foliage. A 50mm is also good for lending emphasis to a series of rapids or falls, while short telephotos provide excellent studies of leaves caught in eddies or trapped on small rocky islets. This is also prime hunting ground for close up pictures of mushrooms and fungi, of which there are several species. 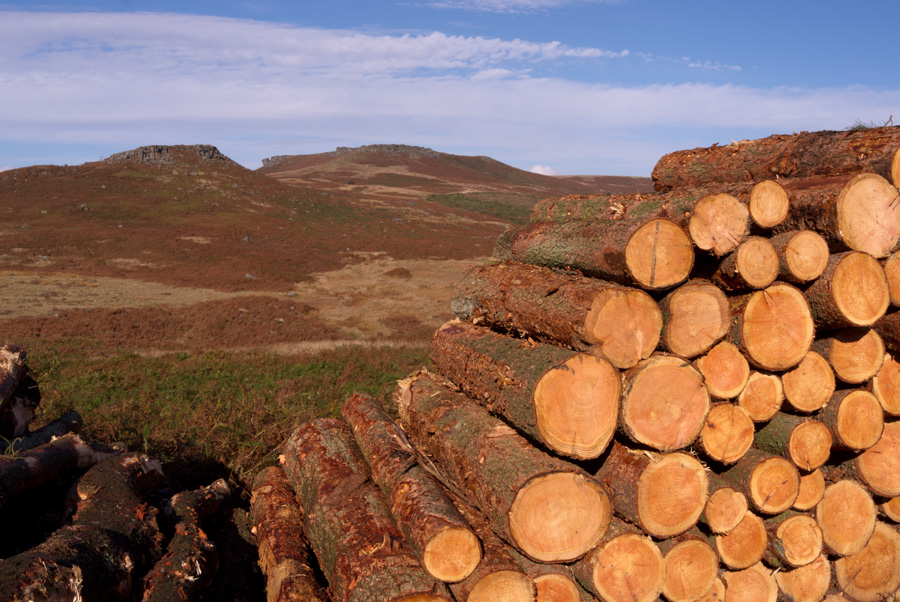 I recall one time when I visited the gorge during Autumn. I arrived early one morning in thick fog and set off following Burbage brook upwards, a little disappointed with the fog’s ability to leech the colour from the environment. Stopping to photograph a small series of waterfalls and spend a few minutes taking in the stillness, I realised the fog was very slowly clearing. Watching carefully as tendrils of mist gradually evaporated, large ancient trees slowly revealed themselves. Shafts of sunlight began to punch holes through the remaining mist, lighting the trees with an almost supernatural effect. Realising that this was a very transient opportunity, I quickly ran off several shots before a deep blue day revealed the gorge in all its splendour. The results were very pleasing, capturing a few moments that would otherwise have been lost to me. I found a 35mm lens most useful in this situation as it allowed a little more subject matter than a standard lens without loosing the drama of the lighting and trees.

It is important to realise that there are two main paths which run parallel to the brook, one on each side. Both are photogenic but the one on the right bank (when ascending) allows easier access to the water, therefore is more suited for capturing images of waterfalls. I tend to follow this one up and return via the other.

The approach of moorland is signified by a gradual reduction in tree cover and the route becomes less steep. Eventually heather and occasional Silver Birch dominate the landscape as woodland relinquishes its hold on the horizon. Burbage brook runs gentler now as it winds through an area popular with families and picnickers due to is easy access from Longshaw or Surprise view car park. The main path diverges here and I tend to head left towards Surprise View Car park, cross the A6187, through a copse of Silver Birch and onto open moorland. I make for Mother Cap, a large gritstone outlier that makes great foreground interest for sweeping landscape shots. Mini masterpieces can be made with a super wide-angle lens and dramatic sky. Mothers Cap also makes a great windbreak for a coffee stop. 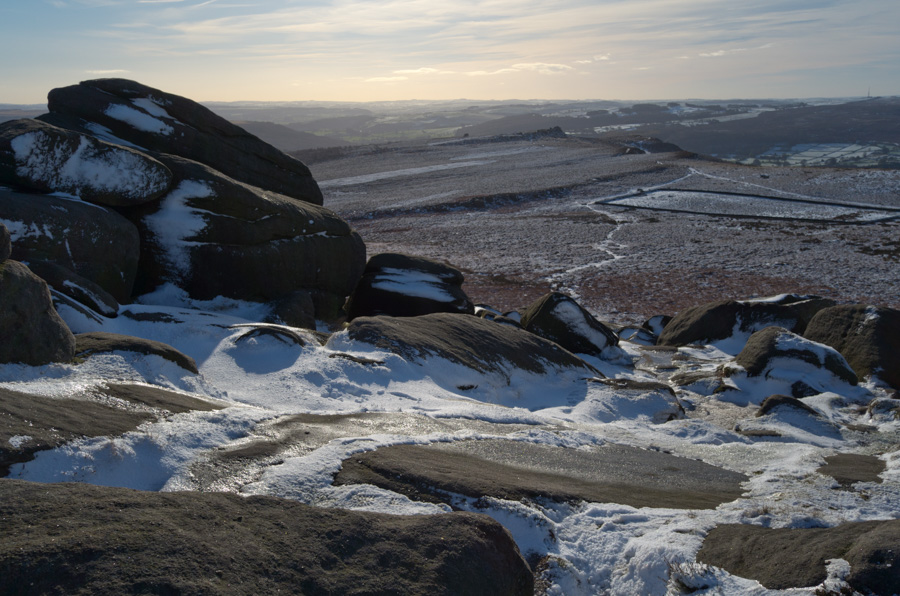 The looming bulk of Higger Tor is very visible from this viewpoint and a well-defined path winds its way across moorland in its general direction. Off to the right, the smaller gritstone outcrop of Carl Wark is worthy of a detour as it is thought to be the remains of an Iron Age Hillfort. Little remains of the structure and, on a bitterly cold winter’s day, it is difficult to believe that this was once a site of human occupation. Tumbled down defensive walls and the remains of an entrance can bee seen, but from a photography viewpoint, I have found that including the whole structure as part of a more general landscape composition works best.

There are several paths that lead the walker to the top of Higger Tor, which vary in steepness – although none are particularly difficult routes. One or two require clambering over gritstone blocks, some of which make interesting foreground inclusions for more general landscape scenes. Pick whichever path suits you and then take time to sit and admire the far-reaching views from the top. I do not have a favourite focal length when shooting from the top of Higger Tor. I have found a super wide to be as useful as a medium telephoto. Wides are great for pulling a tumultuous sky into a composition while telephotos allow more careful studies; for example, a telephoto shot of Carl Wark from here can be very dramatic early or late in the day, and even more so if there has been a dusting of snow. 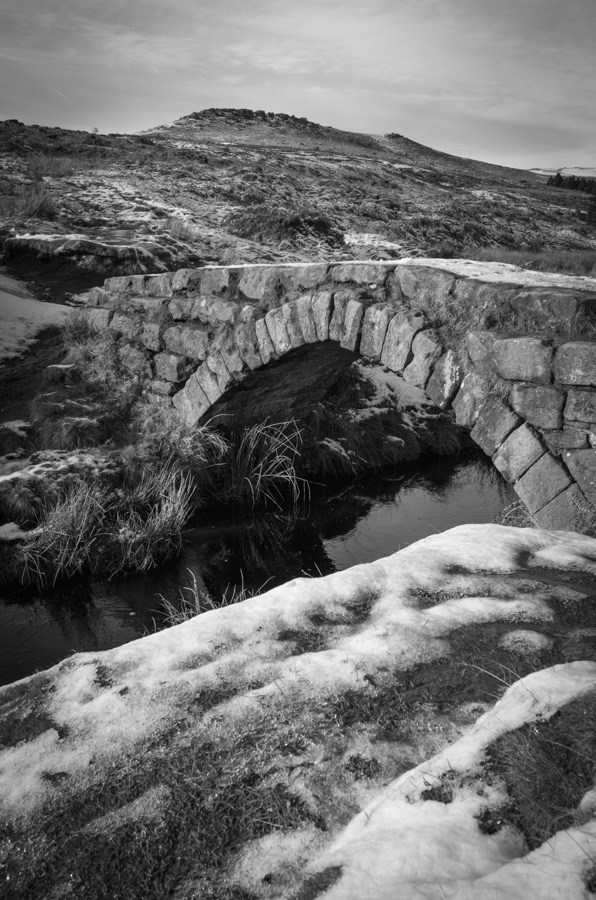 I leave Higger Tor in the direction of Burbage Bridge along a path that eventually runs more or less parallel to Burbage brook. This marks the furthermost point of the walk and there is a choice of two distinct paths to return on. The simplest and more sheltered follows the valley to eventually reach the A6187 and the boundary of Longshaw estate.

An alternative, less trodden, path (and the one I prefer) can be followed that runs along the edge above the lower path, offering superb views that simply beg to be captured on camera. Again, it doesn’t really matter what lens is used as there are opportunities for all focal lengths.

An increase in tree cover signifies the approach to the upper reaches of Padley Gorge and following the brook for a little way soon returns me to the path that took me to Surprise View Car Park earlier. I follow the brook down the opposite bank to the one I ascended (usually the one that runs higher up and further away from the brook). Most waterfall pictures captured from this side tend to involve more of a scramble down to the water’s edge, which can be difficult and muddy. For these reasons I tend to take images at the outset of the walk, from the path that offers easier access.

The woodland here is very atmospheric; in winter its skeletal features shiver in moaning wind. In spring and summer, it takes on a more Edenesque character as fresh greens, bluebells and birdsong burst forth. Autumn sees the seasonal riot of colour before winter storms denude the year’s growth. It is cathartic to walk here what ever the season, whether with a camera or simply to connect a little with nature. And there is a bonus waiting for the weary walker near the railway station. Grindleford Station Café make excellent bacon or sausage sandwiches and, along with a mug of coffee, are ample reward if the day has been a bit challenging.