Written by Steven on 10 September 2013. Posted in Accessories.

Transparency film production has been in free-fall for several years now, as more and more photographers gravitate to other emulsions or technology. With just a few slide films remaining on the market it was obvious that some projector manufacturers like Kodak and Leica would end their involvement with this historical medium, and discontinue machines that were once a photographic mainstay. I must admit that in 2013 I expected very few 35mm projectors being manufactured, but a trawl of the web revealed many models still in production from the likes of Reflecta, Braun, Kindermann and Simda. 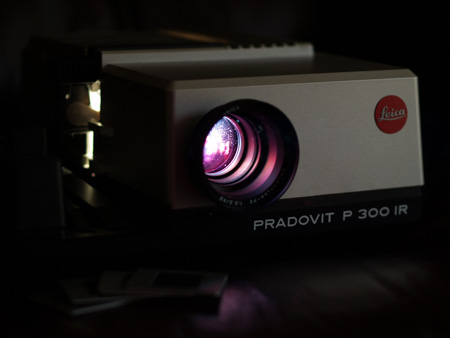 I still like to shoot transparency film and enjoy the experience of a slide show. Many years ago I decided to upgrade my old Braun projector to something more substantial, a Leica P300 IR. At the time of purchase Leica had around four models available, the P150, P300, P600 and RT  The P300/600 were available in two versions, either with a tethered remote control or infa-red (hence the ‘IR’ designation in the model number). The P150 was the least expensive, acting as an entry level model primarily for amateur use. The P300 was a step up from this being more robust but still predominantly made of plastic. The P600 had a metal chassis and was designed for professional use. As I project slides for my own gratification only, I decided to tread the middle ground and opt to purchase the P300 IR which is more than ample for the several hours work I give it each year. All models were discontinued several years ago but are readily available on the used market at prices far lower than when they were produced.

Condenser aside, a projector is to some degree only as good as the lens attached to it and I wished to avoid a model that came bundled with a low budget option. My Braun was an example of this and I was never really happy with the soft corners and vignetting it displayed. I guess I could have changed it but this would have meant spending money on a device I was not entirely happy with. I wanted something to make my images shine and exploit the high quality Zuiko optics I use when making a transparency. Leica have several lenses that are compatible with the P300, from the budget Hektor P2 85mm f2.8 to the Super Colorplan P2 90mm f2.5, offering optimal sharpness and resolution…at a price. Nestled between the two is the Colorplan P2 90mm f2.5. Longer telephoto and zoom optics are also available for projection in larger halls. As I would not be projecting images any larger than two metres I felt that the ‘standard’ Colorplan would be sufficient so I settled on this and the P300 IR body, along with a hard protective storage case. 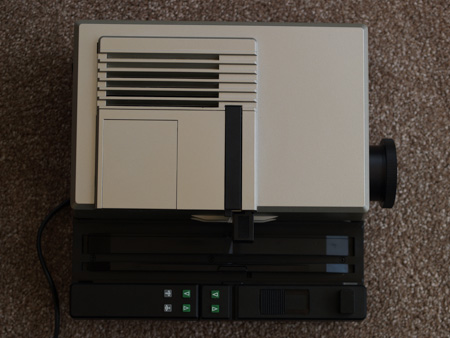 As stated previously, the P300 has a predominance of plastic in its construction although I understand that some of the innards are metal. For a plastic device it weighs considerably more than I expected it to – a reassuring five kilos. What is not so reassuring is the amount of creaking the body does when moving it around. This is not an item I would like to drop as I am sure it would explode into a million plastic shards. I am guessing the weight comes from any metal internals used along with the power supply and condenser unit. So while build quality is good it is not as good as the metal chassis P600. A built in plastic carry handle is a great idea, but I do not entirely trust it.

The lamp has two power settings; 150 and 250 watt, located at the near next to the on/off switch. As my projector can only be separated from the screen to a distance of around twelve feet I have found little need to use the 250 watt setting as it tends to wash out colours due to the screen being too close. In some regards I am pleased about this as I worry about the long term impact bright bulbs will have on the slides. As an aside and an extreme experiment, I have a couple of slides leaning against my office window. They were beautifully exposed when I put them there six years ago. Now there is barely a trace of an image on the celluloid. I am not saying that projection will reduce them to a state like this in my lifetime, but what it does demonstrate is that a slide does and will fade when exposed to light. 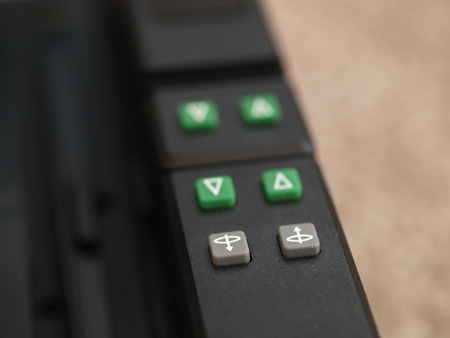 The condenser unit in this model is of a very good quality as it ensures even illumination out to the edges of the image and displays no ‘hotspots’ that wash parts of the image out. The condenser fan does a good job of cooling things down but this does not prevent glassless slides from ‘popping’ after a short while. I understand that he P600 does a better job of this, although I have not compared both models side by side. Fan noise is an issue all projectors have in common and the P300 is no exception. It seems very noisy when first switched on but I soon get used to it. No doubt the small room I use does not help here – I am sure if it was used in a larger hall the noise would become insignificant.

I have never been a fan of cabled remote control devices so I was pleased that modern Leica projectors are offered with both cabled and Infra-red remote controls. Whichever one is chosen, it stores nicely in the projectors’ housing next to the magazine transport. The cabled version offers something the IR does not however, which is a built in light pointer. The remote unit is simple (not much to include on them really) allowing for frame advance, rewind and fine focussing – useful if the autofocus does not get it right, or after a slide has ‘popped’. A similar bunch of buttons are located in the projector housing, next to where the remote slots in. 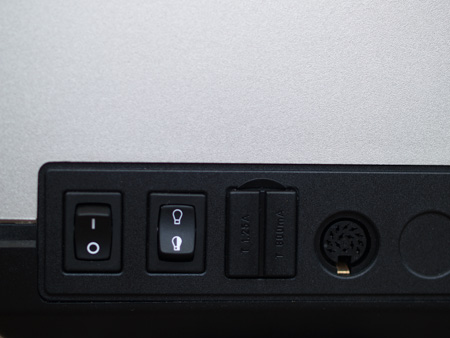 Next to the button array is a flimsy sliding cover revealing a power socket that is used for an optional plug-in reading lamp. The cover on mine soon fell off and I am pretty careful with my kit. It does fix back in but I am concerned that if I put it back in it will drop into the projector mechanism when in storage.

Next to the sliding cover is the IR receiver which can be raised a short way and helps transmits the signals when in a larger room or if obstacles are in the way. In my opinion this is also flimsy; when I took delivery of my first P300 it had to be returned as the IR received had broken off and was wedged permanently in the downward position. Bits of plastic had broken off it and could be heard rattling around the innards when the projector was moved.

The top of the unit allows quick viewing of slides via a small covered illuminated panel which also detaches and provides easy access when replacing bulbs. The film transport and gate assembly raises to allow individual slide viewing or editing of a slide series already inserted into a magazine. Fine levelling adjustment can be done by rotation of the two front feet, which is handy if the screen is not accurately positioned or the projector is resting on an uneven surface. 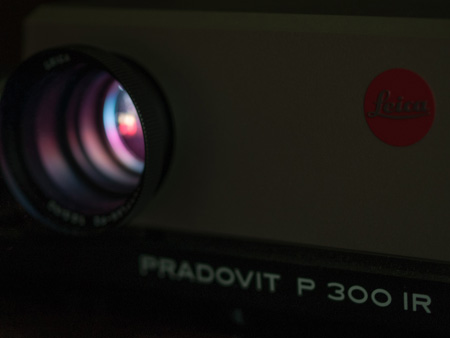 For those people who are into dissolve presentations the P300 supports the necessary control units, although I would have thought they are getting difficult to get hold of now. Another hard to find item is a daylight projection screen which clips onto the projector, bouncing the image off a mirror located in front of the lens onto a small screen (in a similar way that some of the current Braun and Reflecta models do). I had one of these on my Braun and while it was very handy to view slides in daylight and the images were vibrant, I found that the edges were soft and the image reversed. OK for a quick peek but not to be used as a serious viewing aid.

I have found that universal style trays are best used in this model as they offer minimal jamming when compared to LKM types. I store all of my slides in Hama ‘briefcase’ style storage boxes which contain six universal trays and an index card. This means they are always ready for action, although care has to be taken handling loaded universal trays as, unlike LKM’s, the contents can easily fall out.

Several years of using the P300 IR have found it to be a reliable performer that allows me to view my transparencies in rich detail, as captured by the lenses I use. As I also use digital cameras I do not have slide shows as frequently as I used to, but when I do I am reminded how superb analogue technology is and feel that it still has an important part to play in photography.