Written by Steven on 15 April 2013. Posted in Accessories.

In the closing years of the 1980’s, Olympus took flash technology to a new level with the F280 gun. Being the innovative company they are, they took ground breaking strides to overcome the problem faced by all manufactures when it came to flash exposure. 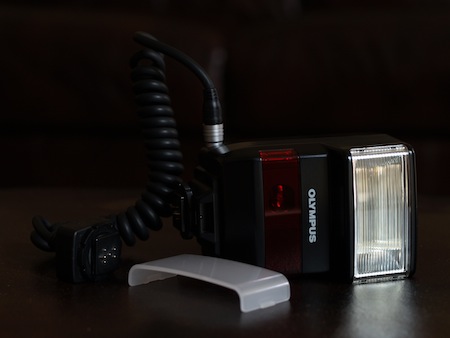 Traditionally, flash guns synchronised at fairy slow shutter speeds, particularly those using a horizontal travel shutter, which included all OM System Camera bodies up until this time. The top synchronisation speed of 1/60th second on OM Bodies is far from useful when attempting to freeze action. Some manufacturers deployed vertical travel titanium shutters in an effort to squeeze higher synchronisation speeds and succeeded in pushing speeds to 1/250th second. Replacing the horizontal shutter in favour of a vertical one was not an option with OM bodies as this would have immediately added size to the camera bodies which detracted from the OM System ethos. So Olympus took a radically different view of the problem and adopted an idea that Minolta had patented a few years earlier.

The duration of a flash emission is astoundingly brief and requires shutter curtains to be fully open to successfully illuminate a complete frame. I have many images taken years ago that clearly show the dark shadow of the shutter curtain due to me forgetting to step down the speed to 1/60th or 1/30th second. What is really needed is a flash emission that can illuminate the entire frame at any speed. Two solutions present themselves;

In the case of the OM System, point 1 can be ruled out immediately as it would mean a complete redesign of the body and lens groups to facilitate it.

Point 2, however, could be achieved by building on Minolta’s earlier patents and extending emission times to cover shutter speeds up to the maximum 1/2000th second. Instead of emitting one large but very short burst of light, the answer was to emit a rapid pulsing burst of light that started the moment the first shutter curtain began opening and quenched only once the second curtain had closed. This ensured that the entire frame was exposed with no curtain shadows.  To the human eye, the pulse would look continues and not strobe – like. Naturally, the main pc board of the camera would need upgrading to take the technology into consideration, as two additional shoe contacts were required to control the FP circuit.

And so the F280 Full Synchro flash was born that allowed two new OM System cameras to take advantage of the technology; the autofocus OM707, and professional grade OM4Ti. When the OM3Ti appeared several years later, it too was compatible with the gun.

By today’s standards the F280 is rather short on features and offers little in the way of controls, other than manual, normal (for use with shutter speeds up to 1/60th second) and FP (for use with shutter speeds over 1/60th second), controlled by a sliding switch on the rear. The only other buttons are the on/off switch and red test button. A red led light is also included that appears when the flash is charged and ready to go.

Below the flash window is a rectangular red lens that houses the autofocus illuminator sensor, used when coupled with the OM707. To the side is a detachable battery compartment door housing 4 AA type batteries. On the opposite size a socket is present allowing the connection of one of just two accessories available, the F0.6m TTL auto cord.

The flash head is fixed therefore does not bounce or swivel. Nor does it have a zoom facility – all features that are required for professional use.  In fact I get the distinct impression it was created with the enthusiast in mind via use of the OM707, and added to the OM4Ti as an extra selling point.

So does the technology work? Having used the F280 for many years I can say that it does but has limitations due to the head being fixed, and the output in Super FP mode being weak. As the name intimates, the maximum guide number is 28 which, even in its day, was not particularly thrilling. Given that the Olympus T-Series flash system had two more powerful guns in its arsenal (T-32 and T45), it would not have taken much development to either 1) extend the emission range of the F280, or 2) introduce a professional grade option sporting a guide number of 40, complete with colour filters, bounce/swivel head etc. But the technology was never developed further for the OM System and only emerged much later with the introduction of the E-System. To sum up, if you want synchronisation at all shutter speeds with your OM707, 4ti or 3Ti camera, the only option is the F280. 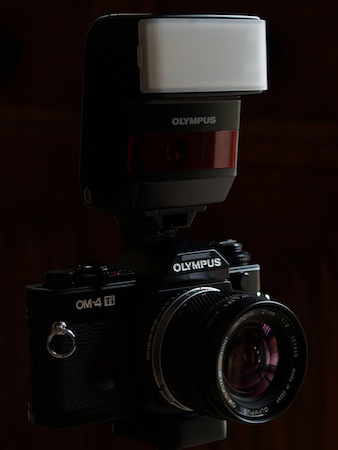 My own experience has found that the gun is useful for outdoor portraits when fill light is required to balance harsh shadows. Or it makes a really useful macro flash combined with the F0.6 TTL cable; on many occasions I like to use a very shallow depth of field to create 3 dimension macro images. Using the lens wide open often results in a shutter speed higher than 1/60th second. Flipping the F280’s switch to FP mode allows me to do this and the TTL metering means that the results rarely suffer exposure errors.

The only other accessory comes in the form of an opaque white plastic diffuser that clips over the flash lens. This spreads out the emission to cover the angle of view provided by a 21mm lens (without the diffuser coverage is limited to a 28mm lens). The diffuser can be useful when photographing interiors of small rooms, but the trade-off is that the maximum guide number is reduced to just 19.

Recycling times are reasonably good but not up to the speed of the latest generation of flash units. It only really gets unbearable when the batteries are beginning to wear down, but the battery life is very good so this is not really much of a problem.

When the OM System was discontinued, I purchased a second F280 as a backup to the first. Apart from initially testing it to ensure there were no problems, I stored it away safe in the knowledge that when my existing one died, I would be able to press the spare into action. This was more than ten years ago and my original unit continues to provide good results.

Today, Super FP technology is widespread with most manufacturers embracing the creative prospects and freedom of use it brings. Gone are the days of being forced to use apertures that did not allow isolation of subject from background, the inability to freeze action (assuming it is very close), or being able to emphasize movement by exploiting long emission times (as is possible with the OM3Ti). And it pleases me to still have and use the model that started it all off.