Written by Steven on 15 April 2013. Posted in Accessories.

Back in the film days, Olympus was top of the tree when it came to macro system components. Along with seven dedicated macro lenses, flash units, bellows and supporting accessories was a unique item – the 65-116 Telescopic Auto Tube, designed to offer a portable method of taking true macro images. 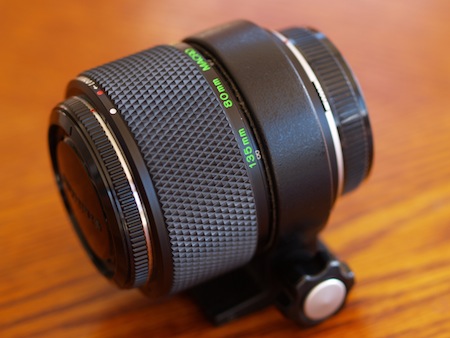 Bellows are great for indoor or studio environments, offering a very wide range of extension and precise control over magnification. Outdoors, bellows become a little unwieldy which is where the auto tube steps in.  What has always surprised me is that few other manufacturers brought forth similar offerings as it is a truly innovative answer to the problem of portability. Those that did provided no automatic aperture linkage between camera and lens, which is where the tube gets its ‘Auto’ designation and hence its uniqueness. This means that the macro lens can be used in a similar way to conventional lenses regarding composition and aperture setting – there is no requirement to manually stop the lens down before exposure, or use a double cable release.

And there is the added bonus provided by Olympus’ OTF metering system; combined with their dedicated ring flashes (and their standard flashguns) exposure is governed by the total light emission hitting the film plane at the point of exposure. Therefore the tube removes the need for more complex flash calculations required when using bellows.

OK, so it is not all plain sailing; extension is not as great as a bellows unit, but 65 to 116mm is suitable for many applications and of course this ultimately depends on the lens used. For example the second generation Zuiko 38mm offers a magnification range from around 2.3 to 6.7 times life size on bellows. Mounted to the auto tube, it still manages a respectable 3.1-4.4 magnification. My favourite macro lens for the OM system is the 80mm f4 and on the tube it achieves 0.45 to 2 times magnification (when used with the dedicated close-up filter) which covers most of the range I chose to work in. 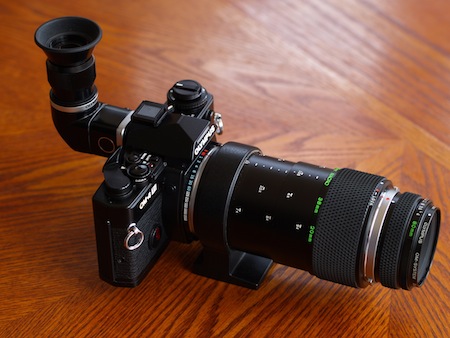 Like many other OM System components, the tube is very well made and constructed of metal with clearly printed magnification settings for the four macro lenses intended with its use in mind (20, 38, 80 & 135mm). The mounts for both camera body and lens are manufactured from stainless steel. A locking mechanism is included allowing it to be locked at any magnification thus preventing accidental shift. This is implemented by a simple twist of the rubber grip anticlockwise to release the assembly. Set the desired magnification by sliding the tube out and then lock by turning the rubber grip clockwise.

A sturdy removable tripod mount is included, similar to the one accompanying some of the Zuiko telephoto lenses and feels very substantial in both weight and design. The mount can be rotated to allow shooting in both horizontal and vertical positions (or anything in between for that matter). I tend to attached this to the Novoflex Castel Cross-Q focussing rack which sits atop a Slik AF2500 pistol grip, mounted to a tripod. I remove the mount when using it hand held, as this lightens things up nicely.

Extending the tube is a very smooth affair and there are no tight points anywhere along its travel. An oddity is the rattle that accompanies its movement, making it sound a little toy like. The noise can be attributed to the many bearings used in its construction allowing it to extend, glide and lock effortlessly. My guess is that careless disassembly would result in a cascade of tiny bearings lost forever in the dark corners of a room. 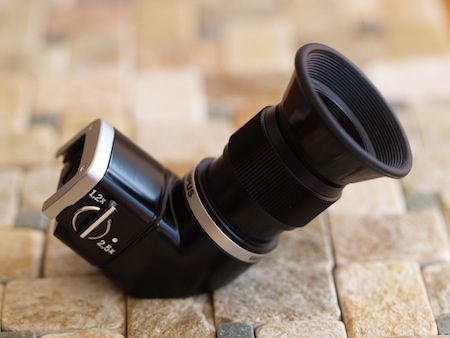 I have used my example for a little over 20 years and it has performed flawlessly throughout its life and shows little in terms of wear – testament to the engineering skills involved.

A second attachment I find indispensable for my macro photography is the Varimagni finder, an angle finder with two magnification settings. Sometimes the camera angle required to capture a macro image can be pretty low, making composition very difficult if not impossible. And the older I grow, the more difficult it gets. This little add-on makes things much easier as not only can I use it to peer at the screen from above, but it rotates fluidly a full 360° with click stops at 90° intervals.

The two magnification settings are;

I tend to find the lower setting adequate for most compositions, but occasionally switch to 2.5 if I am creating an image with a very narrow depth of field.

Dioptric correction (from +3 to -7) is provided by means of a rotating ring on the upright section of the main barrel and being well damped, allows very accurate fine tuning to match the users eyesight.

Like the extension tube, this instrument is very well engineered out of metal and comes with an attached circular rubber eyecup that does an excellent job of blocking extraneous light. The magnification lever is manufactured from a high grade plastic, which has proved more than adequate in the 20 plus years I have been using it. 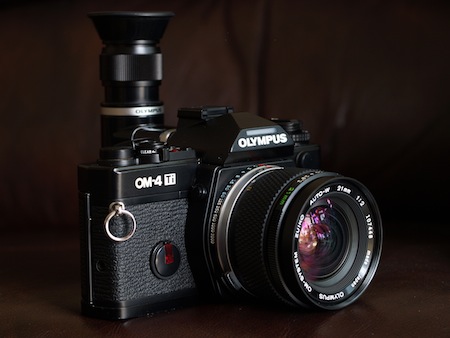 Internally, 9 high grade glass elements in 7 groups deliver the image to the user via a reflecting mirror. Because of the single mirror design, the image is reversed – something that can take some getting used to, particularly when framing the subject. However, the image is extremely crisp, bright and superbly sharp once correct dioptric correction has been achieved.

While the Varimagni finder was primarily designed for use in macrophotography, I have found it very useful for any image shot from a very low angle. I enjoy using a 21mm lens several inches from the ground with enough depth of field to allow fore and background to be in perfect focus. I can achieve this easily with the camera mounted to my tiny Velbon Ultra  Maxi Mini tripod and finder attached. I also recall using it with my 300 and 500mm telephotos as it really helped to establish critical focussing, a problem due to the lenses sedentary maximum f4.5/f8 apertures making the viewfinder somewhat dark.

Both of these accessories have more than proved their worth in terms of functionality over the years and the only improvements I feel could have been made were 1) a second auto tube with an extended range and 2) a lens/mirror configuration in the finder unit that allowed the image to be presented the correct way around.