Back in 1995 Olympus released the last of its professional line of OM series bodies – the OM3Ti. It coincided with their 75th anniversary and was based on the elusive OM3, available around a decade earlier. So why am I discussing it here when all there is to write about it has probably been written? Well, we have one of these in our collection and I have a particular fondness for it. At present, it spends most of its time tucked away in a camera bag full of analogue gear, getting ‘exercised’ once or twice a year with a roll of E-6. 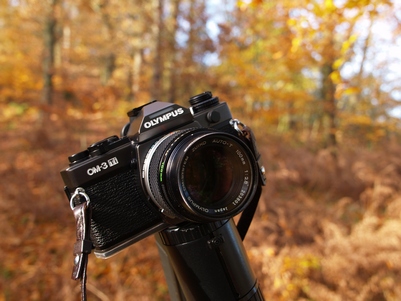 Of all the OM’s, this is arguably the best looking model; clad in grey-bronze titanium top and bottom plates it stands out from its other single digit OM siblings. The finish is anodised making it much more durable that the painted finish of the 4Ti – paint being difficult to adhere to titanium. We have a couple of 4ti’s, one having seen less use than the 3Ti, and it shows far more signs of use due to the paint wearing off the sharp edges.

Olympus folklore suggests that parts from the 4ti assembly line were cannibalised for use in the 3Ti, and this seems to be true certainly of the front casing where the self-timer of the 4Ti would be located. If I feel the skin carefully, I can detect a very slight raise in the surface where the timer assembly would fit. Many other components are probably common to the 4Ti also, such as the motor drive & battery caps, bottom plate (although anodised), film compartment and door. One thing that is distinctly different is the mechanically controlled shutter – the 3Ti can be used at any shutter speed without the aid of batteries (no light meter though). When the shutter is cocked and I listen carefully whilst changing the shutter speeds, the mechanical speed governors can be heard engaging quietly. Comparing it to our OM1n (also a mechanical model) I can only hear a similar noise when changing from 1/60 to 1/125 second. For perfectionists out there, the 3Ti’s shutter makes a beautiful soft sound when released. 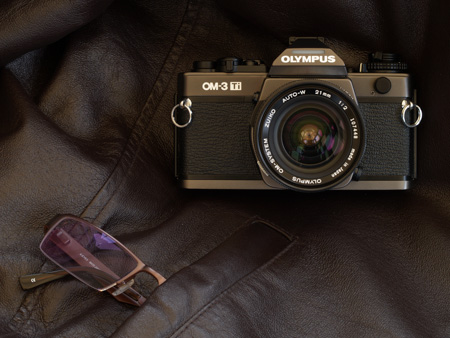 Folklore also suggests that certain staff at Olympus knew the 3Ti would be the final chapter in single digit OM history and with this in mind they designed something enduring and unique. To me it closed the circle of OM Design that began in 1972 with the OM1. The 3Ti is, for me, an updated version of this early model that contains the best features of OM bodies; a mechanical shutter, superb multi-spot metering system and FP flash capability to name just three. More subtle additions such as the use of a brighter focus screen are welcome, especially with my aging eyes.

The 3Ti has always been a rare beast; the one we have is the only one I have ever pysically seen. Myths surrounding the length of the production run put the figure between 4000 and 6000 units worldwide – no wonder I have not seen another. Its scarcity is undoubtedly reflected in the high prices they command on the used market today.

There is no doubting the svelte design of OM bodies lent themselves well to this final model. And (if true) I agree with the designers making something truly enduring. In this they certainly succeeded. The 3Ti has these attributes by the spade-full and makes a fitting swan song and tribute to remember the OM System and its designer Yoshihisa Maitani by.