It has been many years since I owned a telephoto zoom lens of any kind. Burned by poor quality third party zooms of the 1980’s, I have consistently ducked getting another and always opted for primes when requiring telephoto focal lengths. This changed when researching a recent trip to the eastern region of Halkidiki in Greece. Part of the itinerary was to visit the town of Ouranoupoli which is close to the border of the Monks Republic of Athos. 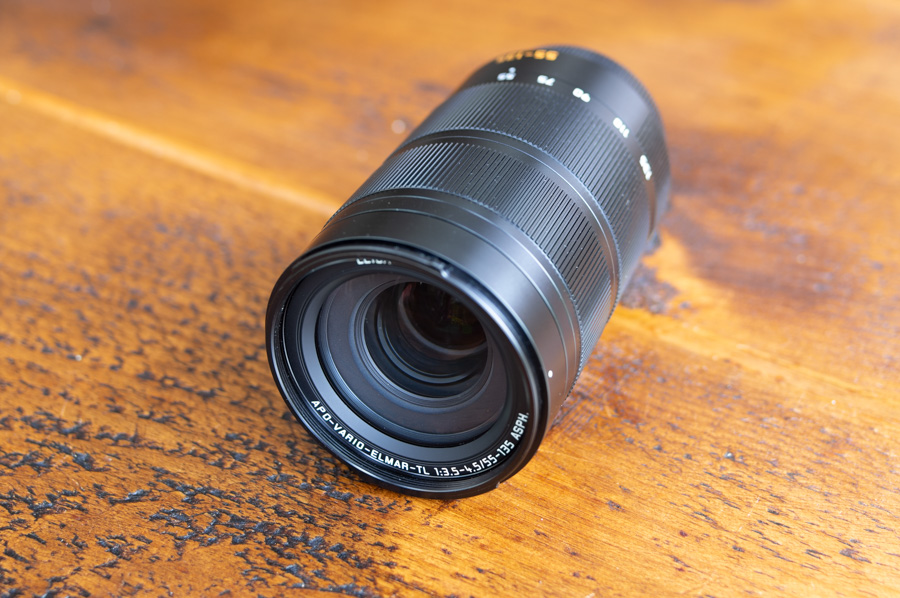 In 1983 I found myself here boarding a boat for a trip along the coast to photograph some of the monasteries that have existed here since pre-Byzantine times. Accompanying me was a newly purchased 80-210 zoom that I was eager to use. Having spent a couple of hours taking pictures of perilously perched monasteries and sketes in dramatic thundery conditions, I was keen to see the results when I returned home. I recall the disappointment to this day when I first viewed the prints. Lacklustre, unsharp and dull are three words that come to mind; and this was not just true of this set of images. Others taken in bright conditions (and with the use of a tripod) were equally uninspiring. I retained very few of the pictures and today, just a couple survive. The lens went on to produce equally uninspiring results before falling apart around two years later.

Sensing an opportunity to reshoot the Athos session 35 years later, my current equipment list clearly lacked something with enough reach to bring out distant architectural detail. Without a permit, the closest I could get to Athos was half a kilometre, from the railings of a boat. As Leica’s TL System is now my preferred equipment, native choice was limited to just one lens that would give me sufficient reach – the TL 55-135 zoom. As this is an APS-C format lens, the focal length translates to approximately the same focal length as its grim 35mm 1980’s predecessor, so I knew it would be adequate.

Having soaked up information about the TL vario when building my system, I was aware that it was an outstanding performer, the only real criticism being its ‘slow’ maximum aperture. But f3.5 at 55mm and f4.5 at the 135mm end was not really an issue for me – I am sure previous zooms I have owned were slower that this… possibly f5.6.

A couple of months before travelling to Greece I made my purchase and waited with a fair amount of excitement for the courier to arrive. As I have written in previous articles, unboxing a new Leica lens is a rare occasion for me, so I tend to take my time and live in the moment a little when unpacking. Like all previous Leica lenses, the box was cased in a plain outer shipping carton which itself was well packed in a further box. Opening it up, I was pleased to see a QA certificate and small instruction booklet. Beneath this was a further carton containing the lens pouch and a rather large hood. Being manufactured from plastic, the hood was slightly disappointing; previous TL lenses purchased have been accompanied by aluminium hoods or, as in the case of the 11-23 zoom, a composite of plastic and metal. 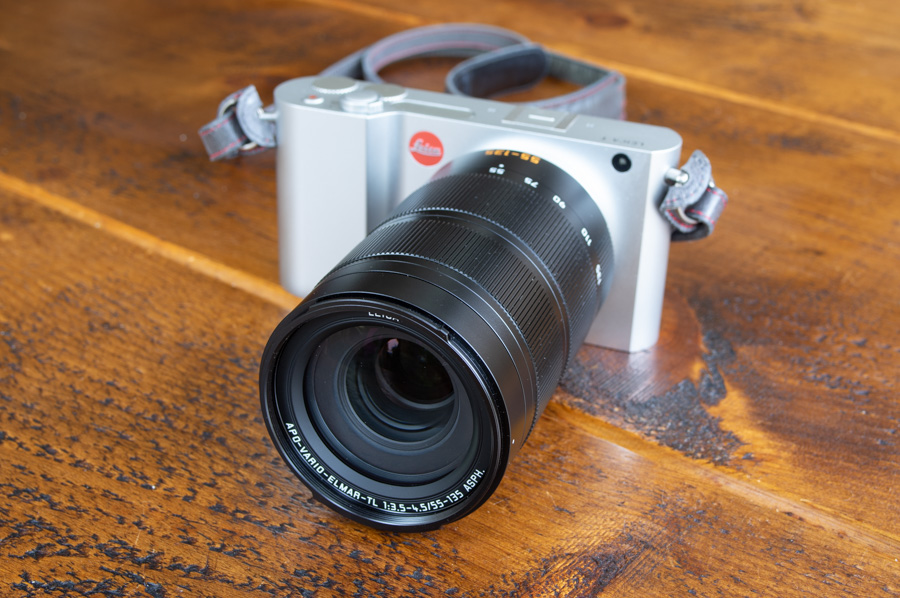 The lens itself was smaller and lighter than I expected, and beautifully constructed. Similar to my 11-23, there is no wobble when the zoom is extended, and the manual focus ring is well damped. Typical of other TL lenses, the finish is beautifully austere, with just the minimal of engravings designating focal length and key zoom settings. Attaching the hood transforms it into a behemoth though, which takes a bit of getting used to. Fortunately, it can be reversed when not in use. I was pleasantly surprised to see that it had a 60mm filter ring, which matches that of my 35 and 60mm lenses. I don’t use filters much anymore, but it is good to know that one size fits all three lenses.

I was keen to get out and put the lens to use, part of which would finally lay the memories from 1983 to rest. As this was Leica I instinctively knew I would be pleasantly surprised, but felt I needed to prove it, so headed into the garden to put it through its paces. In situations where light was compromised, a quick tweak of the ISO allowed me to select high enough shutter speeds to prevent camera shake. I then took it out with me when walking the Derbyshire Dales a couple of times, using it as my sole optic.

Having built up a reasonable collection of RAW files taken at most focal lengths and different lighting conditions, it was processing time. And I was not disappointed; similar to other TL lenses, there was little to adjust in post processing. The colours can be a little muted, but this is how I prefer my images to look. For those who like more punch or saturation, it can be easily added during post processing. Skin tones are natural, sharpness and contrast are exceptional. There is some vignetting when used wide open, particularly when shooting large areas that are the same tone, such as sky. For me, it is not something I am concerned about, as I consider vignetting artistic in some situations. It is an impressive performer wide open regardless of this, delivering excellent edge to edge results. The Apochromatic design reduces primary colour fringing to unnoticeable levels, even in high contrast areas. Out of focus areas are drawn beautifully and provide excellent 3D separation when subject to background distances are optimal. To me, the results are equally as good as the primes I own. 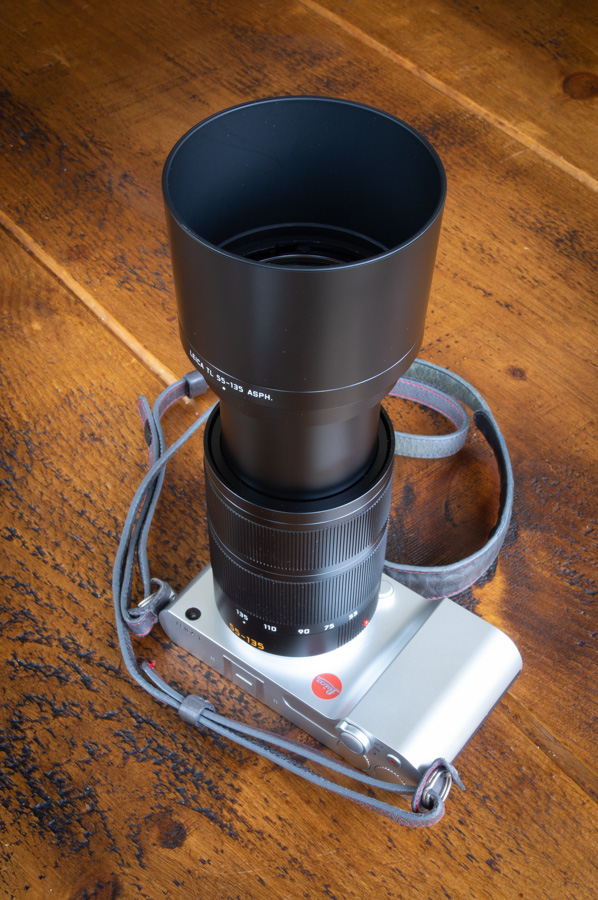 Moving on to Greece, July, and the time had come to put the lens to work in the scenario it was purchased for. A flat calm sea and cool clear light greeted us as we boarded the boat. We had arrived early so bagging prime seats was not a problem, and it was not long before I was pointing the lens at all kinds of subjects. From seagulls to priests, nothing escaped as we weighed anchor and set off.

45 minutes later we arrived at the first monastery and I could finally begin superseding the images taken as a 22-year-old. This time I took far too many – perhaps the fear of them being duds remained close to me, even though the screen previews looked fine. As Mount Athos loomed into view, its flanks and summit were covered in cloud. I was surprised how quickly and accurately the lens managed to focus in these conditions as there was little in the way of contrast. The cloud parted on Athos’ summit long enough for me to grab a dramatic picture at maximum zoom of the craggy peak. I had very little time for composition, but the lens didn’t let me down.

Disembarking the boat back at the port, we headed to a taverna for a much-needed frappe and a swift review of the shoot. To say I was elated was a bit of an understatement. I found the zoom to be extremely versatile, so much so that I used it for more than 60% of the time I was in Greece. I think I had simply forgotten how useful telephoto zooms are and finally banished the bad feeling that had taken root in the 1980’s.

Having purchased the 55-135 for a specific task, I quickly realised that it found its way to my side on far more occasions than originally intended. I thought it would lay idle most of the time, but this is simply not the case. I guess I am still in the honeymoon period, but it remains great fun to use while delivering spectacular results. The balance takes a little getting used to when attached to a ‘T’ style body and the hood is used. I am guessing that it may be more suited to the CL style body, although this is pure conjecture on my part, having not yet tried it.

At the time of writing, we are drawing up plans to visit the monasteries at Meteora in Greece, next year. This was another location I shot in 1983 with the miserable zoom. Assuming the trip goes ahead, it goes without saying that the 55-135 will be coming along. I can see the pictures in my mind’s eye – it is simply a matter of realising them.